How to recognise and treat plant fungus

You may know fungi as disease-causing organisms, or as mushrooms that grow wild, and there are thousands of different ones. The yeast used to make bread and pizza dough rise - or to ferment wine and beer - is also a fungus, and certain medicines, such as antibiotics, come from fungi.

However, there are also fungi that can attack plants and can cause diseases. Some use your plant hosts for food or a place to reproduce, causing damage to the plant.

Fungi can also affect the quality of crops, causing an accumulation of toxins within the plants, with the toxins produced being dangerous for both humans and animals.

Fungi can live inside plants or on their surfaces and can adapt to follow a plant’s life cycle, perhaps remaining dormant when the plant is dormant, or moving to another plant during dormancy or wait in the ground, feeding on dead plant material.

Sometimes it is hard to recognise one infection from another.

Water sitting on the leaves can cause fungal diseases - remember to water the pot, not the plant! Pouring the water over the soil of the plant and not on the foliage will help prevent fungus spots from forming.

Around 85% of plant diseases are caused by fungal organisms, and below are five of the most prominent.

Powdery mildew is not fatal, but it can make your plants look quite sick, caused by fungi spores that are blown around in the wind.

Symptoms appear as white, powdery splotches or spots on the upper sides of leaves or on stems, like a dusting of talc. Over time the leaves will turn yellowish and twisted. If left untreated, it will spread to include the undersides of the leaves and the flowers. 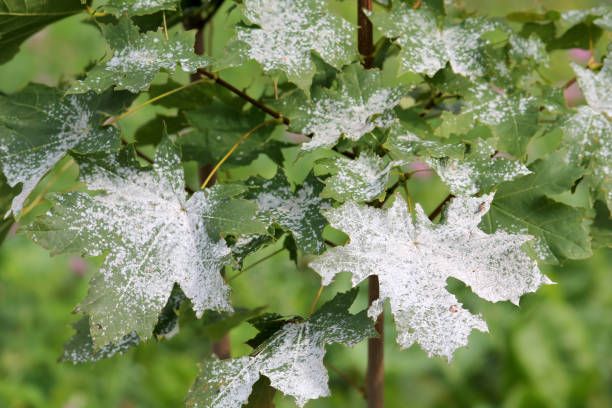 Remove the diseased leaves while being careful not to shake and spread the spores around and use a good fungicide spray – there are some that will combine a miticide and an insecticide as well if bugs are getting pesky too.

Blackspot is a common disease that primarily affects roses, but can also attack other plants and becomes a problem when conditions are hot and humid.

Symptoms typically show as rapidly expanding black, grey or brown spots on the upper surfaces of the leaves, and might feature yellowish halos, and leaves will drop. 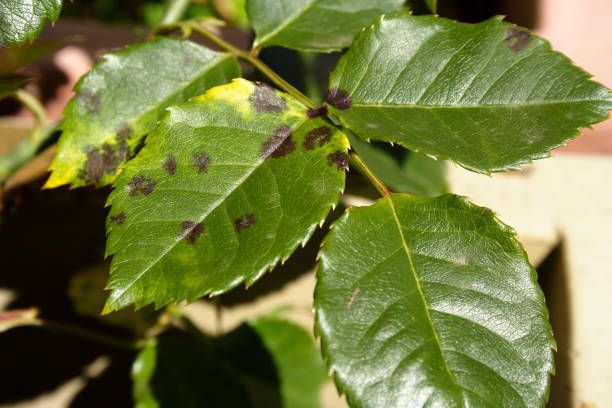 Remove fallen leaves from the ground to stop it from spreading, but don’t add them to your composting pile, put them in the rubbish bin. Treat the plant round the base with any fungicide throughout the spring and summer.

Leaf spot is similar, usually caused by pathogens and sometimes other causes such as herbicide injuries. Larger clusters of fungal leaf spot are referred to as anthracnose or canker and will also cause leaves to turn yellow and drop.

This fungal disease is a clever one and can survive and reproduce itself in dead plant debris. The spots are most often shades of brown, or even black, and may often feature concentric rings or dark outer margins.

Treat with an anti-fungal treatment, paying closer attention to the plant base, and again water at the base and not over the leaves, keeping the leaves as dry as possible.

Rust is a common disease on roses, amongst others, and is hard to get rid of, but it is possible to keep it under control. It will usually appear as rings or spots of brown on your plants' leaves, and they most often start on the leaf undersides, spreading to the upper sides too.

Isolate affected plants if you can, to help prevent spreading. Even without yellowing first, leaves may fall when brushed or rustled. 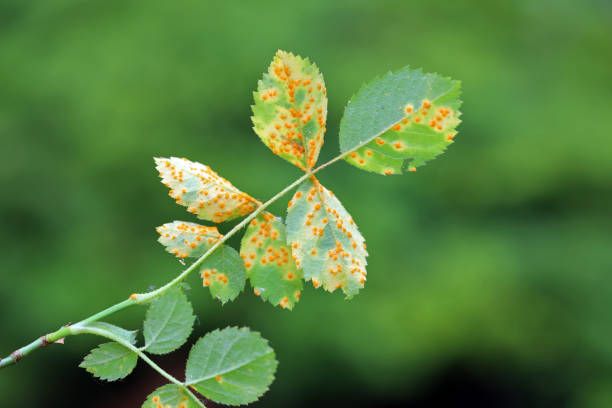 Gently remove the infected leaves (trying not to shake and spread the fungus), and a good spray of fungicide around the base of the plant can also help greatly.

Blight is similar to powdery mildew, spread by the wind. It causes browning, and then death of plant tissue. There are many diseases that cause similar symptoms in plants, all referred to as blights.

Treating plants with a preventive fungicide garden spray early in the season, before symptoms start occurring, can offer some protection.

Can you hear me?

From Your Garden’s Inception to Implementation

Keep calm and clean your pots

How to give your houseplants a festive makeover

What are moths for, exactly?

How to recognise and treat plant fungus