The Arteon is one of the latest cars to get the ‘R’ treatment. Jack Evans finds out what it’s like to drive.

Volkswagen’s got quite a range of performance ‘R’ models these days. There’s the popular Golf R, as well as the T-Roc R and the larger Tiguan R. There was also the Touareg R right at the top of the SUV line-up, though it looks like that car’s days are numbered.

Now, we’ve got the car we’re looking at today – the Arteon R. This isn’t an SUV, but rather a go-faster version of Volkswagen’s sleek-looking estate and fastback. We’re looking at the former, which Volkswagen calls a ‘Shooting Brake’.

The head-turning looks of the Arteon R are one thing you notice right off the bat, but we’ll dive into those later. This new model brings a distinctly performance-orientated flavour to the regular Arteon, which has already impressed thanks to its excellent refinement and high-speed comfort.

The Arteon R aims to blend those existing characteristics with a whole lot more power and capability. It’s something many brands have tried to do in performance versions of regular cars, but we’ll have to wait and see whether or not the Arteon delivers. 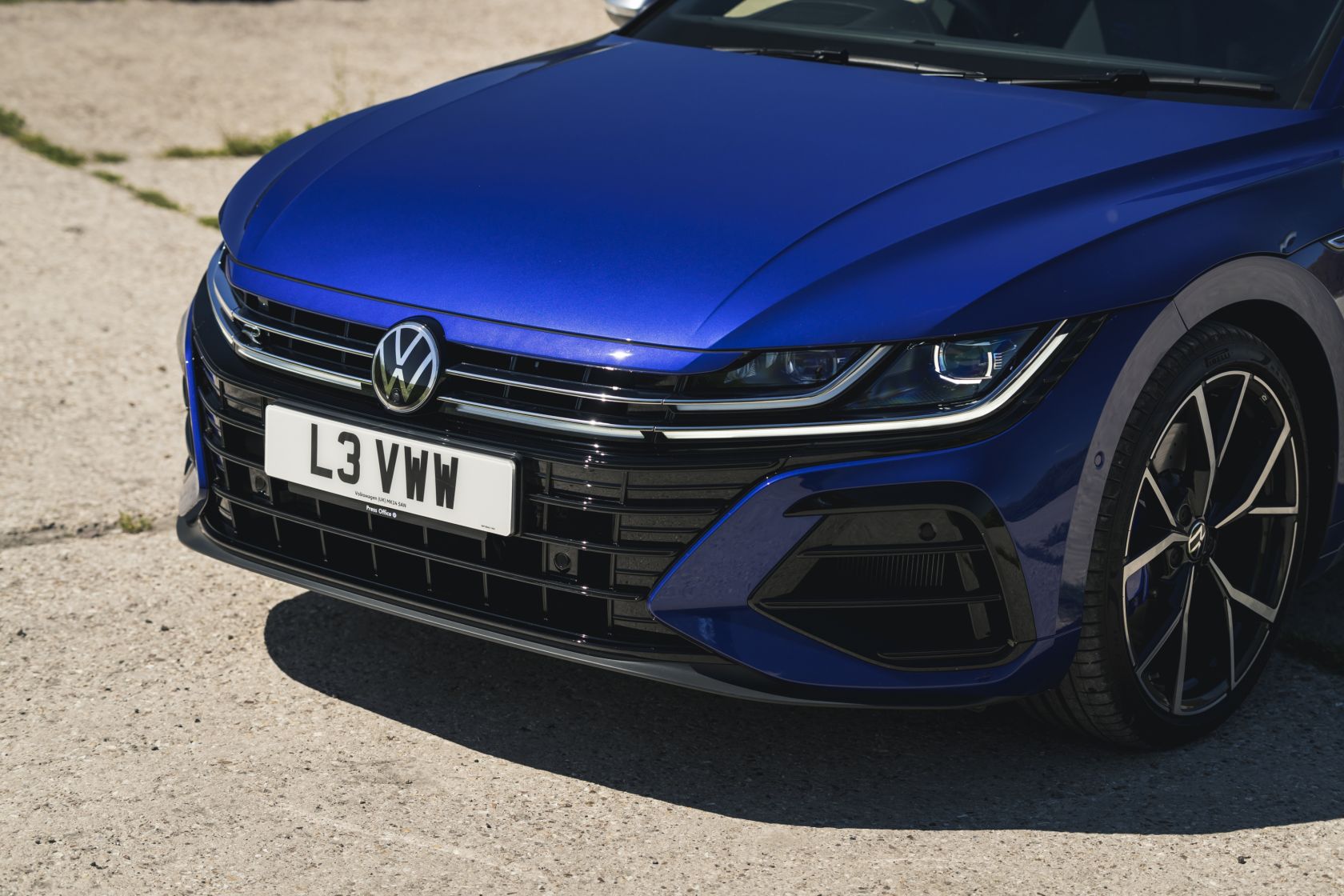 As with the other cars in the R range, the Arteon uses a turbocharged 2.0-litre petrol engine which sends all of its power to all four wheels. In total, you get 316bhp and 420Nm of torque which, thanks to that all-wheel-drive system, can easily be transferred to the road to enable a 0-60mph time of 4.7 seconds and a top speed of 155mph. For context, that’s only slightly slower than the 4.5 seconds that the standard Golf R will take to do the same speed.

Efficiency-wise, Volkswagen claims you should see just over 30mpg. However, during longer motorway runs, we saw well over this figure and actually neared 40mpg.

That blend of performance and comfort is a mightily tricky one to get right, but it feels like the Arteon R has struck a really nice compromise. Yes, at slower speeds its stiffened suspension does tend to jostle the car somewhat, but thanks to standard-fit Dynamic Chassis Control, you can soften off the dampers and make the car a lot more comfortable than you might expect.

At a cruise, it’s impressively quiet and refined. In the background, you have that performance on offer too, which can be deployed in all conditions because of the all-wheel-drive system. You have to switch the car into ‘R’ mode to get the engine into its most vocal setting, mind you, as it’s otherwise quite muted and understated. 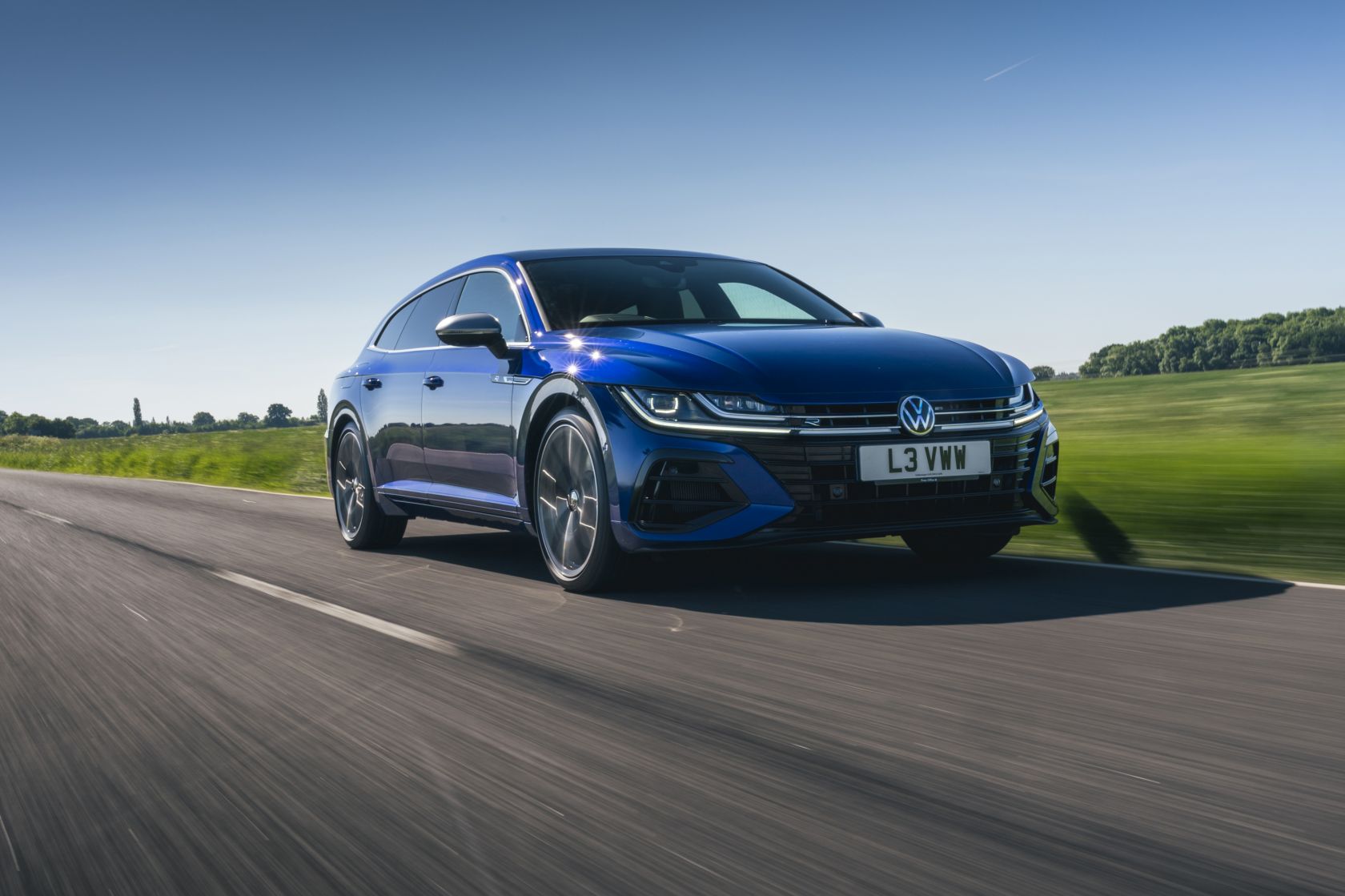 We’re going to take a stab here and say the Arteon – in Shooting Brake guise – is one of the best-looking road cars on sale today. These looks are largely unchanged in the transformation into an ‘R’ version too, which we think is a great move – the Arteon’s regular looks are so good, they didn’t need much fettling in the first place.

Having said that, there are some notable tweaks. You’ve got the quad exhaust pipes at the back, for instance, as well as a smattering of ‘R’ logos. We’re just not sure about the ‘R’ badge at the rear underneath the Volkswagen logo – it looks a little obvious and contrasts the Arteon’s otherwise stealthy appearance.

There’s a theme of comfort flowing through the cabin. The front seats are particularly good and provide loads of support while still managing to look relatively sporty thanks to blue accents and ‘R’ badges on the headrests. They’re electrically adjustable and heated, too.

It’s in the area of boot space where the Arteon R Shooting Brake does really well. You’ve got 590 litres of space to play with, increased of course by folding down the rear seats. There’s a nice low-load lip, too, so putting heavier or bulkier items in there isn’t too tricky. 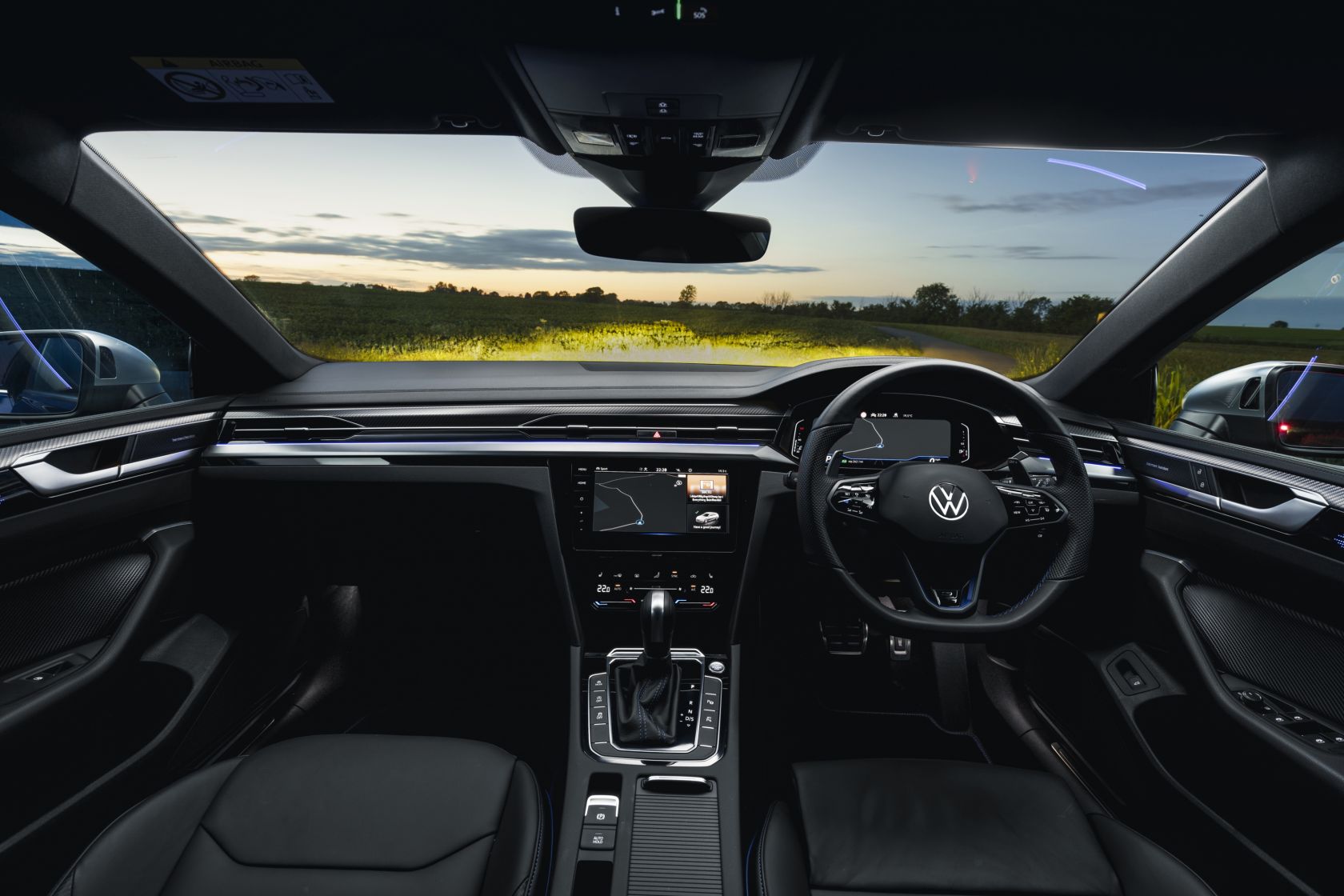 Because it sits right at the top of the Arteon range, the ‘R’ gets all of the bells and whistles you could want. Highlights include 19-inch alloy wheels with eye-catching blue brake callipers sat behind them, while the Dynamic Chassis Control which so transforms the Arteon’s ability to adapt to different road surfaces and driving requirements come fitted from the off, too. It’s something we’ve seen available as an option on many Volkswagen cars, so it’s good to have it as standard here.

The Arteon R Shooting Brake feels like the type of performance car you’d be happy to grab the keys to on a daily basis. It’s got that go-faster approach that other ‘R’ models bring, but where it delivers is in its refinement and cross-country abilities.

Passenger comfort levels are great too, and whereas the Golf R has a more aggressive take on things, the Arteon R’s more fluid, approachable direction is a very welcome one – particularly if you’re driving big distances.

Star gazing as it should be in Portugal

It’s time for a Portuguese challenge!