Peugeot is expanding its line-up with the new 408 fastback. Ted Welford heads to Barcelona to put it to the test.

Against the vast swathes of SUVs, manufacturers are increasingly having to think outside the box when it comes to designs – which equates to increasingly bolder options for customers. The latest example of this comes from Peugeot, with its new 408.

Designed to sit between the conventional 308 hatchback and 508 saloon in the line–up, Peugeot’s calling it a ‘fastback’ and is targeting buyers looking to escape an SUV, yet want something more exciting than a traditional hatchback. But is it more than just a niche-filling exercise? 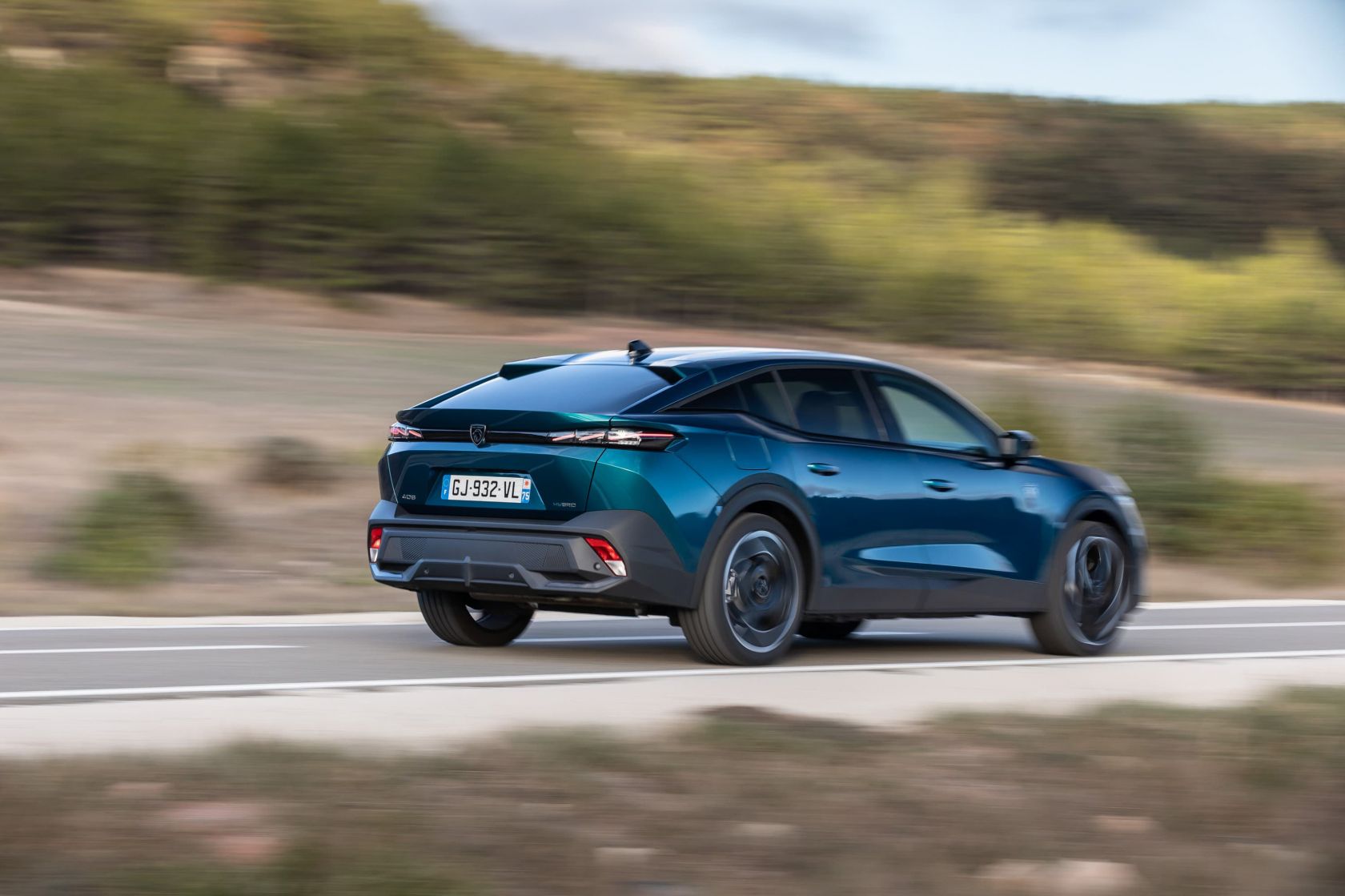 The 408 is a new addition to Peugeot’s range and arrives with a striking new look. We’ll explain more on this later, but a few highlights are its fantastic colour-coded, frameless grille along with the popular SUV cladding for a more rugged appearance.

Electrification is core to the 408 too, with hybrid versions predicted to account for the bulk of sales, while there’s the new version of Peugeot’s i-Cockpit system, bringing the latest in-car technology that the firm has to offer.

There are three powertrains on offer with the 408 – a 128bhp 1.2-litre turbocharged petrol engine that serves as the only non-electrified version, and a choice of two plug-in hybrids.

Both these hybrids use a 1.6-litre turbocharged petrol engine and are paired to the same electric motor and a 12.4kWh battery. An eight-speed automatic gearbox is also used, with power delivered to the front wheels. 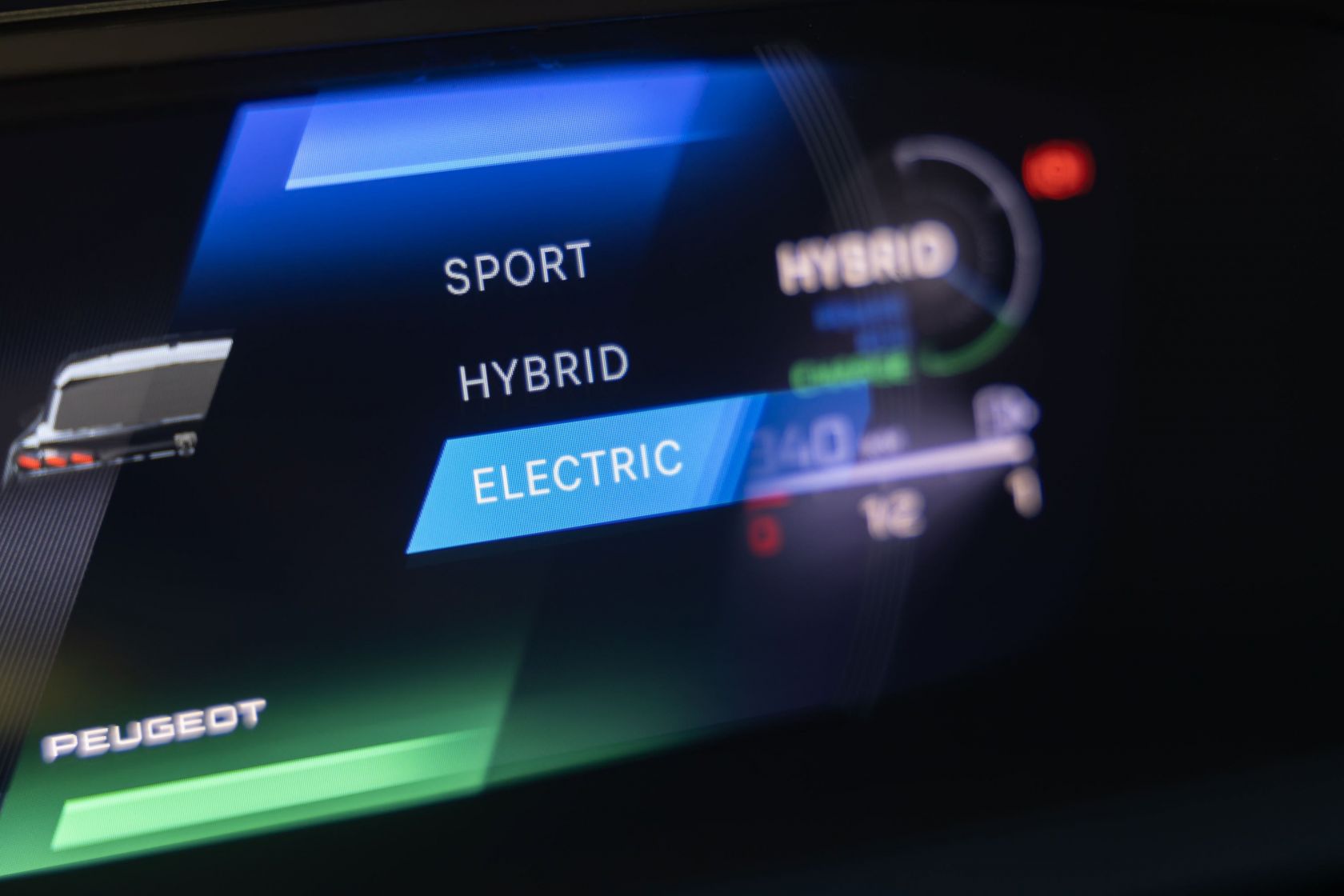 There are two combined power outputs – 178bhp or 222bhp, with our top-spec test car using the latter. The sprint to 60mph takes 7.6 seconds (only three-tenths quicker than the 178bhp car), with a top speed of 145mph possible.

Peugeot claims up to 40 miles of electric range is possible (though based on our testing, we reckon 30 miles is more likely), with Peugeot saying more than 200mpg and CO2 emissions of 26g/km. Speaking of charging, it will take three hours and 25 minutes to charge the 408, though you can reduce this time to an hour and 40 minutes with a faster 7.4kW onboard charger.

Peugeot won’t admit it, but the 408 is essentially a sibling model to the Citroen C5 X – a model with a particular focus on comfort with its softer suspension.

But here, Peugeot has managed to liven up the experience a touch, with the 408-feeling flatter through the corners, and feeling more secure if you put your foot down a bit. It’s no sporting model, but it sticks to the road well, while the hybrid setup delivers a decent amount of punch when the ‘Sport’ driving mode is selected.

At the same time, it rides well with comfortable leather and Alcantara seats helping out with this, while the refinement on motorways was particularly impressive. The hybrid system isn’t the smoothest, however, and the petrol engine and gearbox aren’t the quietest or most responsive when the battery range is depleted. 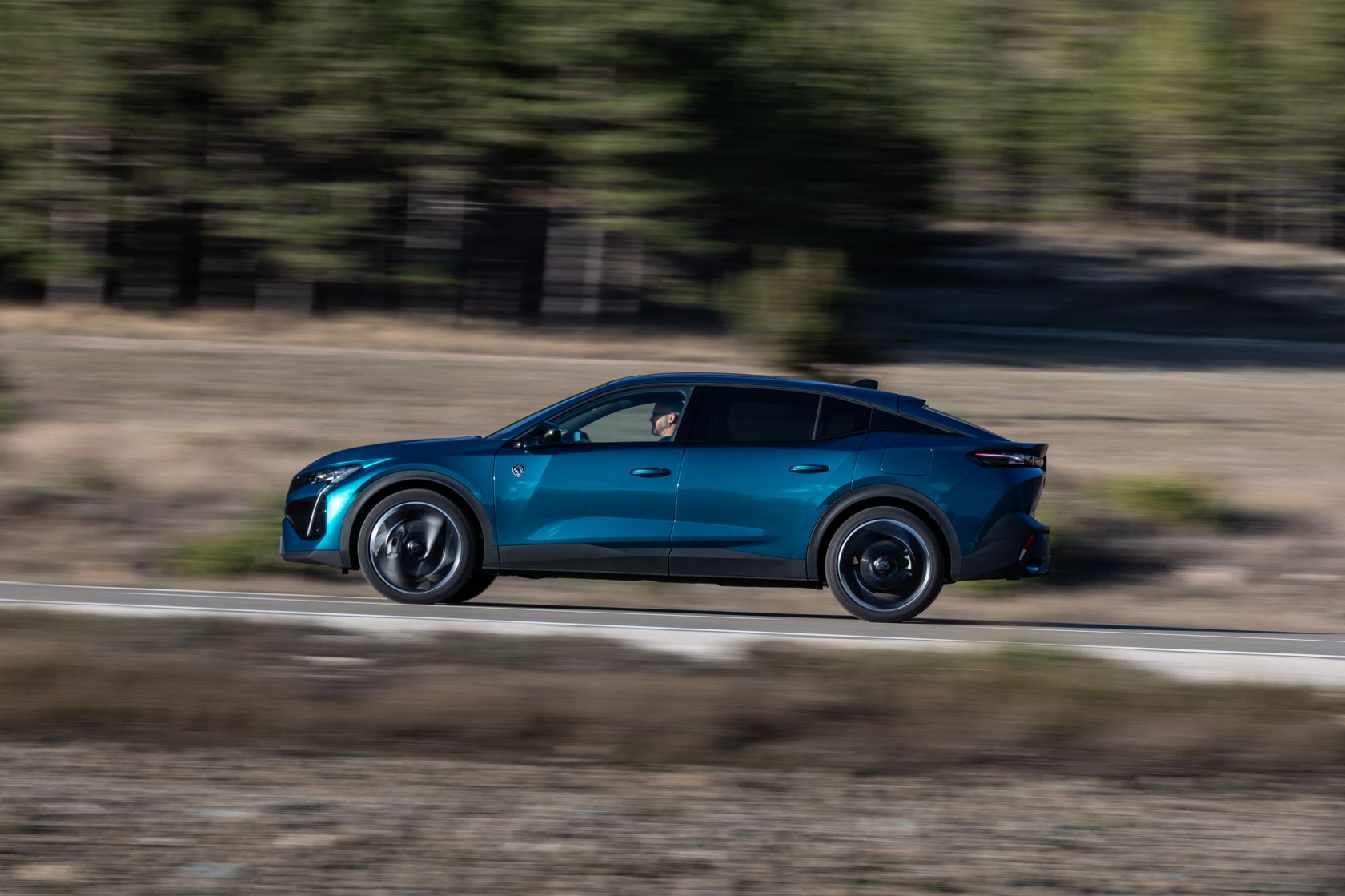 The 408’s design could really divide opinion. It’s Peugeot’s boldest model in some time – and that’s coming from a brand that has been pushing the boundaries anyway.

If you like a clean, fuss-free look, it might not be the car for you – as there’s an awful lot going on. There are lines, creases and angles all over the place, but combined, it’s a really smart package and one that gives off a look of a car more expensive than it is. The number of people that stared at the 408 on our test route only emphasised this. That frameless front grille is stunning, as are Peugeot’s trademark ‘claw’ headlights.

Bits we don’t like? All personal of course, but we think there’s too much plastic cladding going on at the rear, while the 20-inch alloy wheels (thankfully optional) are challenging. That’s being kind.

Inside, the 408 really delivers on the promise of feeling larger than a regular hatchback. The 471-litre boot (536 litres on non-plug-in models), is a great size, while there’s a decent amount of room in the rear seats. Headroom is slightly impeded by a combination of a sloping roofline and panoramic sunroof, but 6ft adults will still be able to sit comfortably. 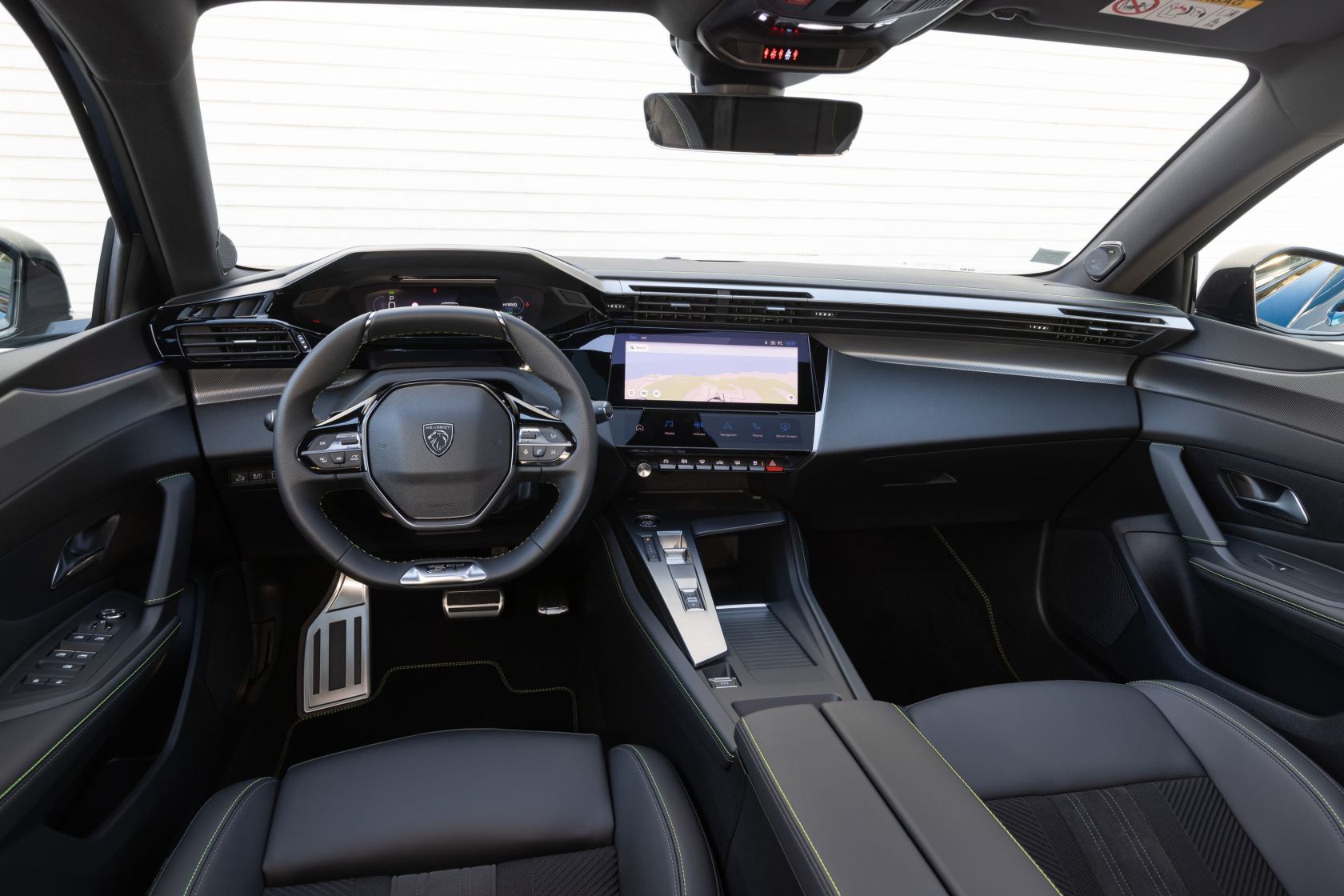 The quality throughout the cabin is excellent, with green stitching and Alcantara and leather seats (fitted to GT models) only adding to the ambience.

The i-Cockpit system is a touch hit-and miss, however. The digital dial display offers 3D graphics, making it slightly harder to read than a standard 2D effect. The small steering wheel (a feature Peugeot has used for some years) also remains a point of contention – with the top of it often restricting the vision of the dials themselves.

Standard equipment on the entry-level Allure trim includes Peugeot’s latest 10-inch touchscreen, which is fantastic to use and offers quick and easy widgets that make it far less fiddly to use on the move, along with a 10-inch digital instrument cluster, 17-inch alloy wheels and a reversing camera.

Mid-spec Allure Premium brings much more visually-pleasing 19-inch alloy wheels, along with keyless entry and adaptive cruise control. If you want all the bells and whistles, the GT packs full Matrix LED headlights, a heated steering wheel and electric boot, along with the aforementioned colour-coded grille we’ve already mentioned.

The Peugeot 408 feels like a breath of fresh air in the increasingly ‘samey’ new car market. Bringing a cool new design, it will likely appeal to both hatchback and SUV buyers that want to combine the two models without losing out on too much of one or the other.

Also packing a high-quality interior, good on-road manners and a generous amount of space, the 408 is a really welcome addition to the Peugeot line-up. The only real sticking point comes from fellow French brand Citroen with its C5X. The 408 might offer a sharper design and slightly better interior, but it doesn’t quite justify its price over its arch-rival.

Putting the Thrifty Kitchen to the test