That’s one of the many questions that constantly swirl around Melissa Thompson’s head – a food writer and cookbook author who says she’s “always been interested in the stories behind food”.

Jamaican food – where her father is from – particularly piques her interest. “Ackee and saltfish just rolls off the tongue, it’s such a classic dish. But those things are quite odd, when you think about it – there’s ackee, then there’s saltfish. They’re not necessarily a natural pairing,” she muses.

“How did they become, who thought to put them on a plate together? It works so well, but obviously everything has a beginning.”

Thompson, 41, was surprised to learn ackee isn’t originally from Jamaica, despite being synonymous with the country’s cuisine (it’s actually native to West Africa, and came to the Caribbean through the slave trade). “I was looking for a book that satisfied my curiosity about the history of Jamaican food,” she says, but “it didn’t really exist” – so she decided to write Motherland. She refers to her debut as a “cookbook with this historical narrative”, with Jamaican recipes interwoven with powerful essays about the history of the country, particularly the impact of slavery and colonisation.

1. In a Dutch pot or large saucepan, fry the onion in a little oil. After eight minutes, add the garlic and ginger and cook for another couple of minutes before adding the spices, mixed with a little water to prevent them burning. Stir and cook until the spices become aromatic.

3. Remove the lid, mix in the spinach and leave for five minutes until cooked through. Taste, then add salt until seasoned as you prefer. 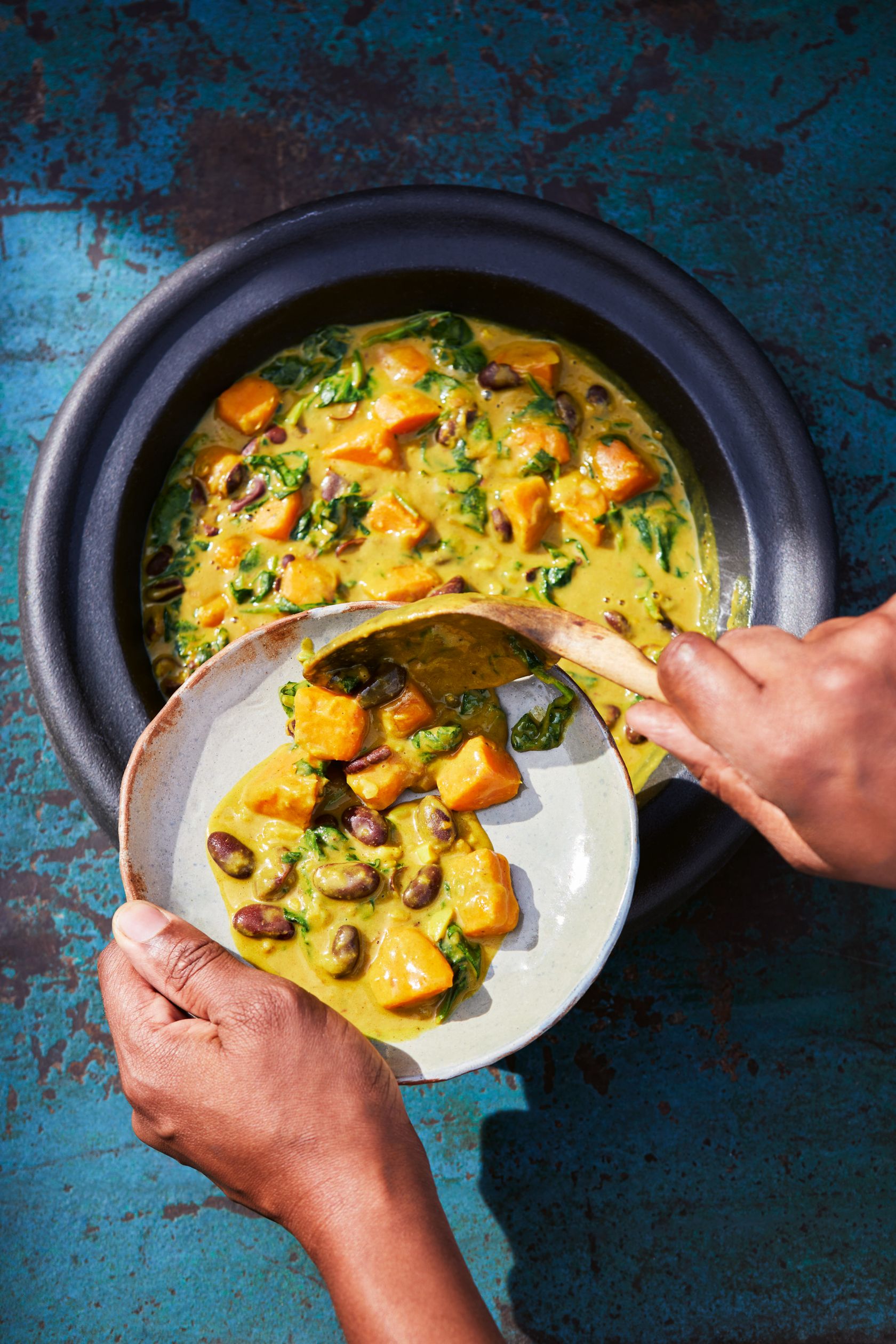 1. Remove the heads and shells of the prawns, leaving on the tail sections. (You can also use shelled prawns, as long as they are raw.) Mix in a bowl with the garlic, ginger and some pepper and leave for 30 minutes.

2. Pour oil into a medium-sized saucepan, following all the usual precautions for deep-frying and heating to 180°C.

3. Mix the flours in a bowl and pour in the ginger beer. Stir loosely, as vigorous mixing will get rid of the bubbles you want to keep; don’t worry if there are some lumps.

4. Just before cooking, season the prawns with a good pinch of salt. Holding a prawn by the tail, dip into the batter, then drop into the hot oil. Cook until the batter puffs up, about two minutes. Repeat to cook all the prawns, frying them in small batches so as not to overcrowd the pan.

5. Drain on a wire rack placed over kitchen paper, not directly on kitchen paper or the batter will go soggy, and serve with a squeeze of lime. 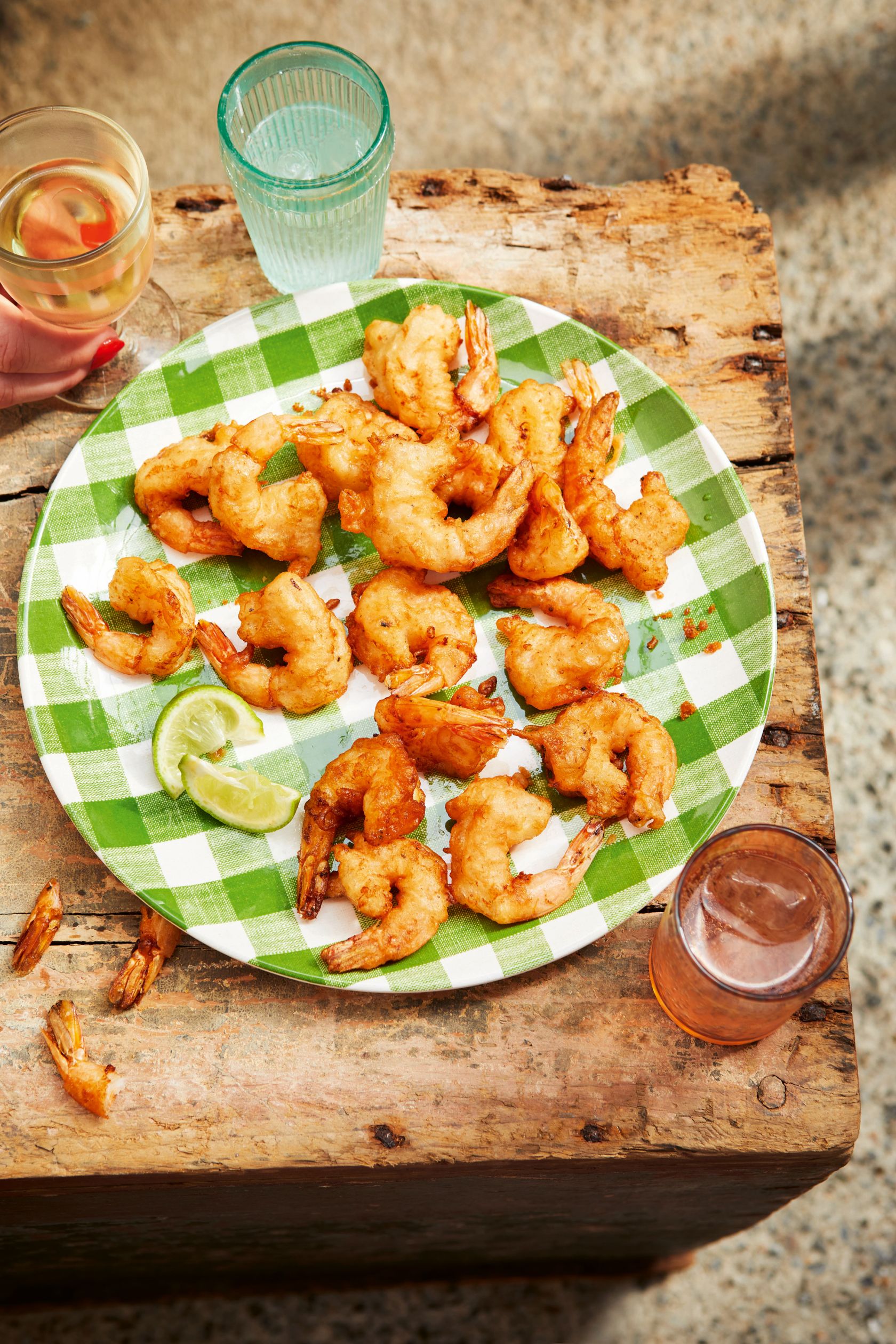 7 egg yolks (freeze the whites for another time)

405g can of condensed milk

125g unsalted butter, plus more for the tin

1. In a saucepan, simmer the Guinness until it reduces by about two-thirds. Leave to cool.

2. Meanwhile make the pastry. Using your hands, rub the butter and flour together until the mix resembles breadcrumbs. Mix in the sugar and egg yolk and then add the measured water a little bit at a time, until the dough comes together. Don’t knead any more, just wrap in cling film or greaseproof paper and refrigerate for 30 minutes.

3. Preheat the oven to 160°C/fan 140°C/Gas Mark 3. Butter a 20-centimetre tart tin and remove the pastry from the fridge. Dust your worktop with flour and roll out the pastry into a circle roughly 28-centimetres in diameter. Coil the pastry around the rolling pin and uncoil over the tart tin. Carefully push the pastry into the corners of the tin and leave the edges rising above the edge. Prick the base of the tin with a fork all over, then line with greaseproof paper and baking beans or rice. Bake in the oven for 15 minutes. Take out the greaseproof paper and baking beans and bake for a further five minutes. Remove from the oven and leave to cool.

4. In a bowl, gently beat the egg yolks with the condensed milk, trying not to get too much air or too many bubbles into the mix. Stir in the double cream and reduced Guinness, then stir in the remaining ingredients.

5. Pour the custard into the pastry case and bake for 40–45 minutes; it should still have a wobble in the middle. Remove and leave to cool.

6. Grate extra nutmeg over the top and chill before slicing. 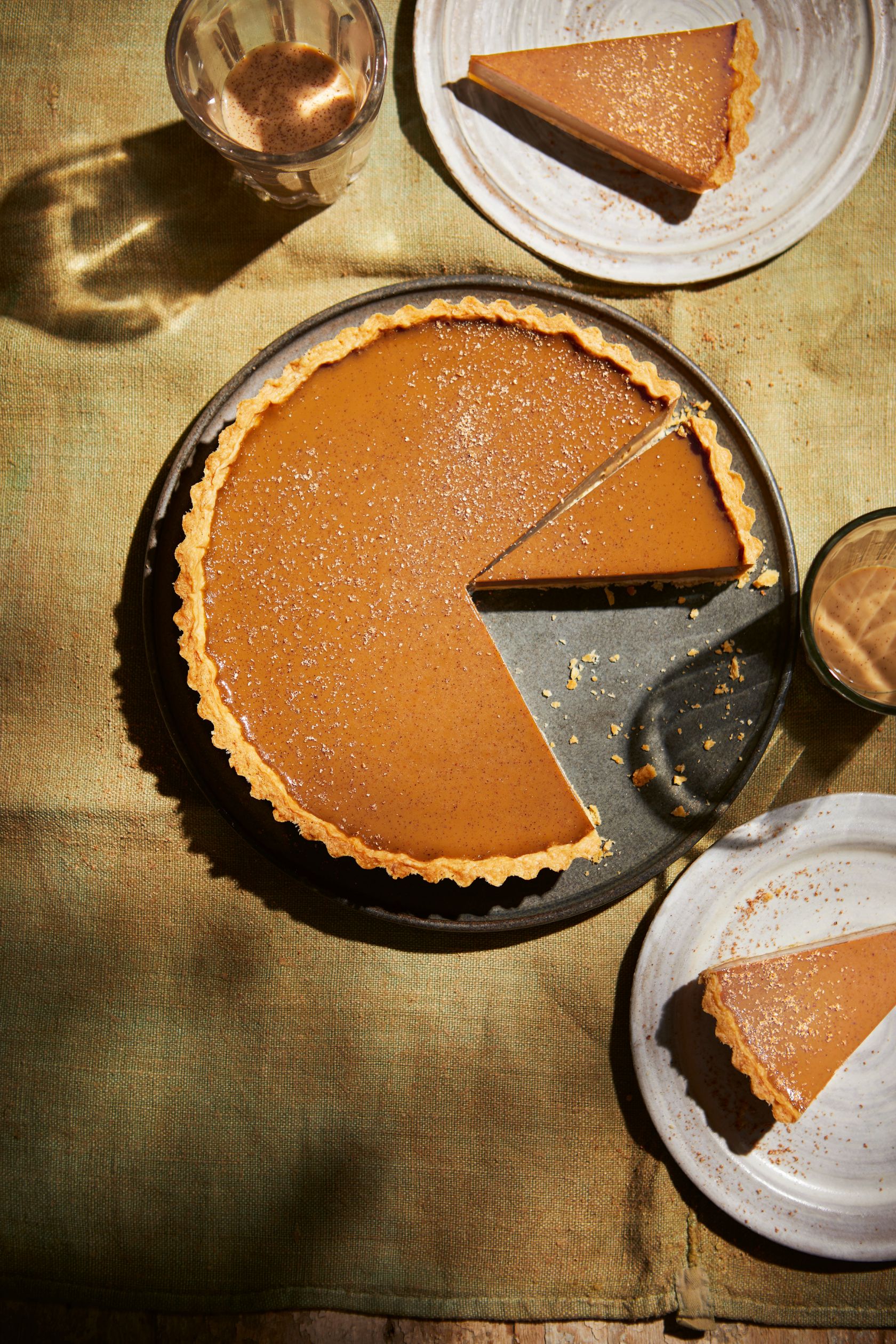 Motherland by Melissa Thompson is published by Bloomsbury Publishing