A Taste of Honey

For every season of the year.

If you’ve been to any of the local craft fairs in the Loulé/Olhão area over the last few years, you would no doubt have spotted a rather calm and sweet young beekeeper called Tomás. At his stall, he sells all kinds of different and intriguing honey, but also some more unusual things like lip balms and even a surf wax - imprinted with his Apicultura Algarve logo of a Queen Bee.

To bee or not to bee?

To help him get into the ‘bees-ness’, Tomás told me he had a French mentor called Jean Pierre Lérethé, a true master bee-keeper, who, towards the end of his life, took Tomás under his wing as a kind of prodigy and taught him everything he knew. From what I understood, the French method of beekeeping is somehow different and sounded to me to be a little bit more extreme. I say this because, when I later asked Tomás about the protective equipment he uses, he told me he does use them now (because of the sheer number of bees he has it would be impractical not to) but Jean Pierre had taught him NOT to use gloves - as it was the only way to truly get a feel for what you are doing. Indeed, you soon learn, Tomás told me, that the key to beekeeping is to be calm. If you don’t panic, they won’t either.

Tomás has bee hives located all over the Algarve, as well as a few in the lower Alentejo which keeps him almost as busy as his bees as he has to visit them regularly. Especially in the springtime, as this is when bees can decide to swarm. This is when the nests become overcrowded and the Queen Bee, surrounded by some of her worker bees, decides to go and look for a new place to live. When this happens, beekeepers, like Tomás, want to find them in time so they can encourage them to take up residence in one of their hives again. 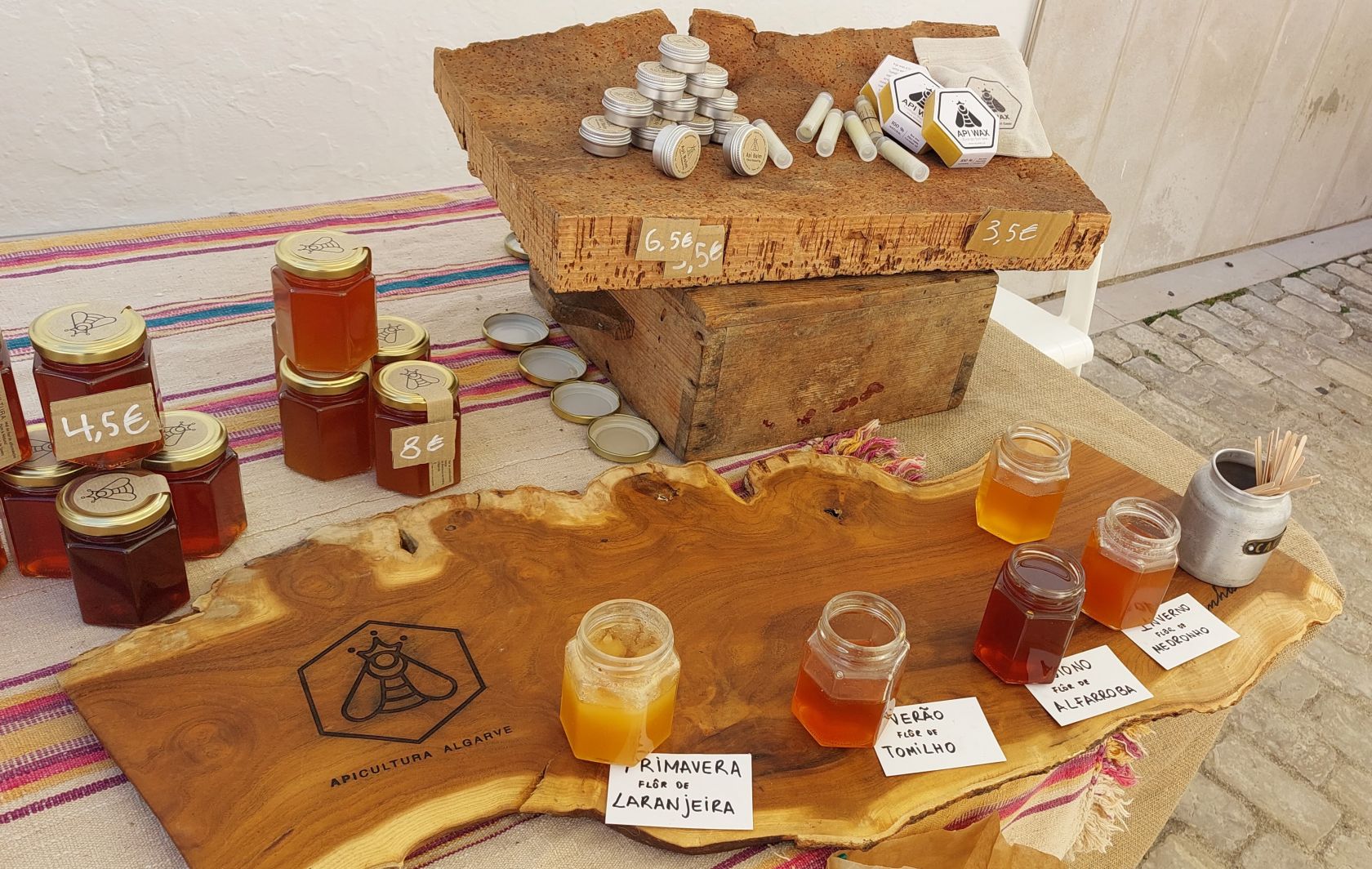 At Tomás’s stall, he has 4 different types of honey for every season that he invites you to try. You will see they vary widely in their taste and colour simply because of the different flowers that are in bloom at that time of year.

In spring, for example, it's a light orange blossom honey that truly looks like liquid gold. Orange flowers have sedative properties, so this is a good one to help you to relax and to help you drift off to sleep.

In the summer, thyme is the flower in bloom. It's a slightly darker honey. It has lots of thymol, a natural antiseptic and this honey is great for coughs, stomach pains and high blood pressure.

‘Alfarroba’ or carob trees are a very important source of winter food for bees in the Algarve and the honey made out of this tree is, like the carobs themselves, very dark. It's got quite an intense flavour and has a slightly bitter aftertaste. It's a favourite among honey connoisseurs

And finally, we have ‘Medronho’. This is the rarest and hard to come by of Tomas’s collection. Very different from other types of honey, it has a bitter-sweet taste and you either love it or hate it. Tomás loves it and says that to him it tastes like pure medicine. Its antioxidant, anti-inflammatory, anti-bacterial, anti-asthmatic, anti-all sorts, basically. 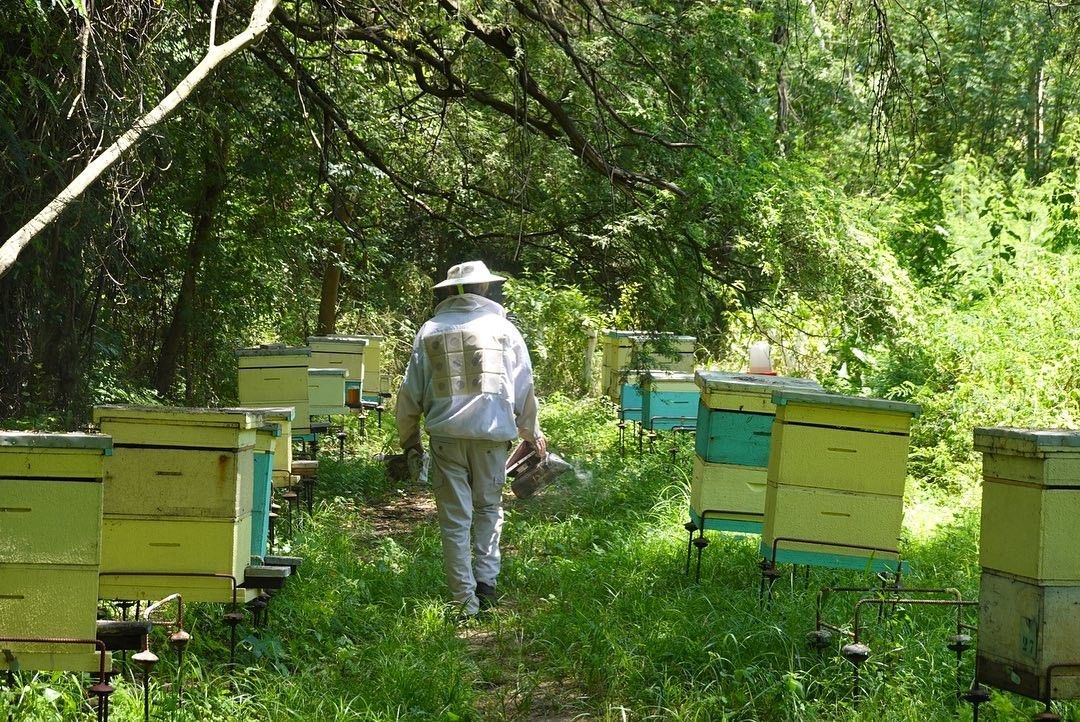 As I mentioned earlier, Tomás also has a few other unusual things at his stall that grab your attention. There’s a natural lip conditioner made of beeswax, coconut oil and argan oil which naturally leaves lips intensely nourished and hydrated.

And, being local surfers, Tomás and an engineer friend of his also developed a surf wax out of beeswax, pine resin and coconut oil. I don’t know too much about surfing, but I imagine that with honey in their repertoire, bees would be just the creatures to help make something naturally sticky enough to keep you stuck to your board.

Save the bees - save the world

Tomas loves his bees. I could tell just by the care he took fishing one out, when he was dismayed to find it had somehow accompanied him to the market and was stuck drowning in a puddle of honey at his stall.

All of Apicultura Algarve’s products are 100% pure and natural, using only natural methods of extraction and production. Tomás absolutely refuses to use additives or mixtures even if that would increase the quantity he's able to produce. His job may be to collect their honey, but for him the most important thing is that his bees are happy and buzzing - so that they can get on with their business of ‘tickling flowers', which, let's face it, is one of the most important jobs on the planet. 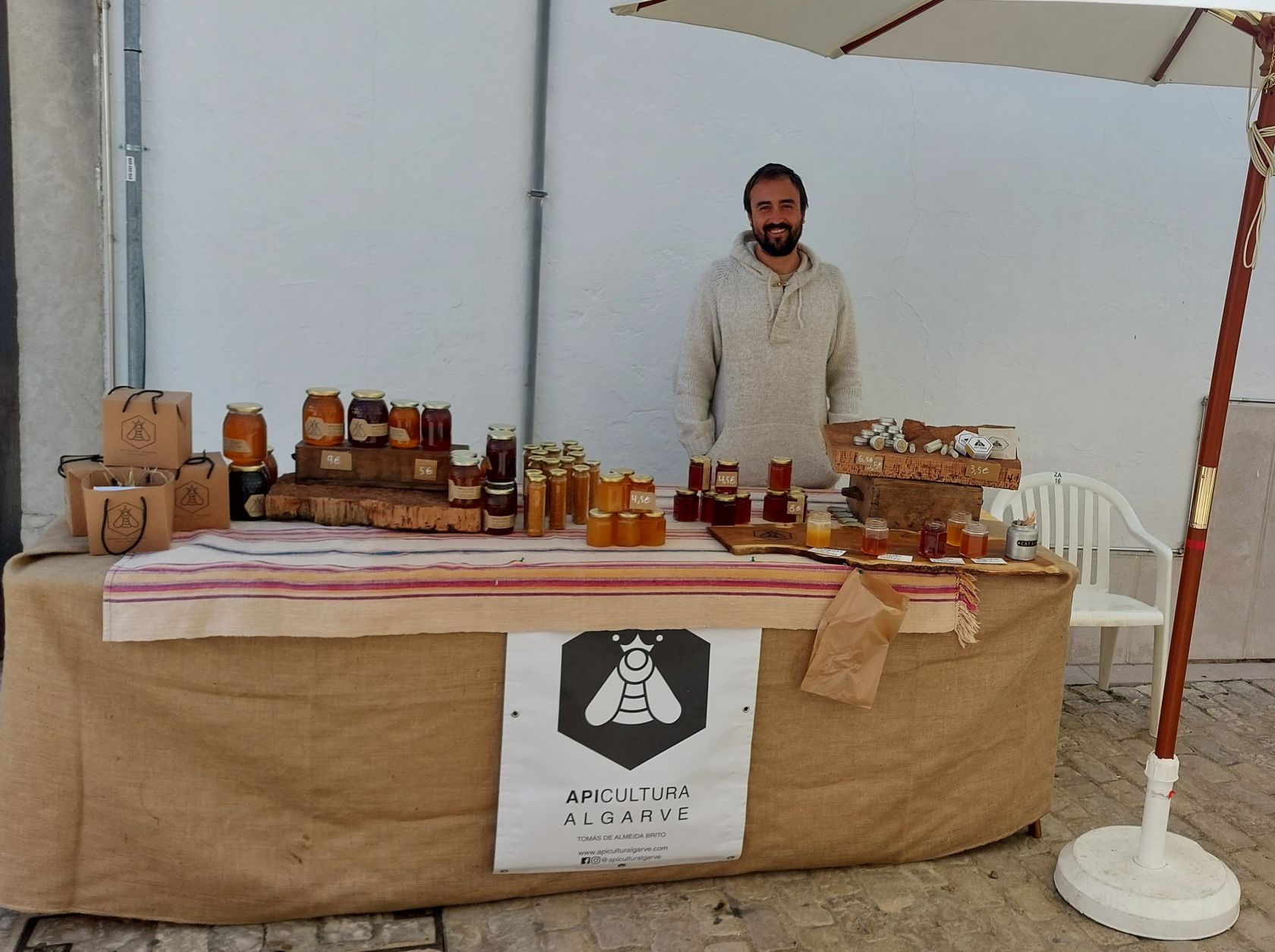 The thing about natural honey is that not only has medicinal properties, it also never goes bad. Just so you get the gist: archaeologists sometimes dig/find jars of honey, and the honey in there is still edible, hundreds of years later.

Summer’s coming, and so are the strawberries!

Homes in the future

By PA/TPN, In Lifestyle, Environment, Renature

Finding your true self

By Paula Martins, In Lifestyle, Health

A glimpse into lives of parent puffins

Judicial "earthquake" on the cards

Turn your old toothbrush into a surfboard

By Jake Cleaver, In Lifestyle, Sustainability

My first car was a V8 Range Rover

By Douglas Hughes, In Lifestyle

How to support someone with a health problem, Part two - Active Listening

By Paul Jokinen-Carter, In Lifestyle, Health

Beyond self-sabotage is your true self

A Taste of Honey