HomePortugalA day in the life of a new Lisbon arrival

A day in the life of a new Lisbon arrival

Have you ever walked down the street pinching yourself and wondering how you got there?

I live in Lisbon, City of Light. If you question why it’s called that, Google will spit out some statistics about 220+ days of sunshine. However, if you live here, you’ll know it goes deeper than the holiday brochure blurb. The place positively glows with a golden hue; the pastels of the homes leap out and scream ‘’be happy’’, the striking black and white (albeit treacherous) pavements deliver hours of fascination, and the architecture enchants with no two facades alike. That’s why I pinch myself, not to mention my fascination with the intricacies of the language, the odd whiff of dried salt cod (bacalhau), and the birds that seem to sing all day and night.

I pinch myself because I am happy and delighted to call Lisbon my new home. My husband, on the other hand, finds it all rather amusing that I can sit and regal him with my latest observations and new stories. I am never at a loss to recount some tale of the days’ happenings as we sit and try yet another new wine over dinner. (Wine, by the way, is a whole other story, which hopefully I’ll get to share later).

My husband is Portuguese and the first to admit that he is re-discovering his birthplace through my eyes.

Like many who move here, it has not necessarily been the easiest segue from life in another country (in my case Mexico). The complexities of the ‘’nesting’’ experience here - renovations of a 300 hundred-year-old home, Portuguese licensing bureaucracy, residency requirements, in addition to growing an international business, and the relaxed Portuguese approach to timelines, make it difficult. But, living in this beautiful country has been worth every minute of frustration.

In the event of our four-year home renovation (everybody assumes we must have bought a palace but sadly, it’s actually very small) we have run into some hurdles, mainly caused by Covid-19. So as an interim we decided to buy an even smaller place where we could lay our heads until the construction work was finished, in Alfama.

My husband’s Lisbon (Alfacinha) friends are all a little baffled by this choice of neighborhood, and my husband too took some serious convincing that the area was cute and fun and might be charming with an interesting quality of life. We bought during Covid-19, so the extent of the life in Alfama, and the number of hours in the day when life continues at full throttle, was not revealed in its true magnitude during lockdown! For instance, the quaint patio at the foot of our stairs with a glorious tree that sat in complete silence throughout 2019 is in fact home to one of the area’s most popular open-air restaurants (Pateo 13) which encourages singing and live music into the early hours. I see this as a bonus, and revel in the extent of the life that unfolds on our doorstep.

A village in the city

My husband, not quite as accepting at first, has come to refer to it as a village and now chats easily with the local ladies at the water fountain as well as with, some hilarious Ginjinha sellers and the sardine grillers who waft their smoke up into our apartment during the Festas of Santa Antonio. 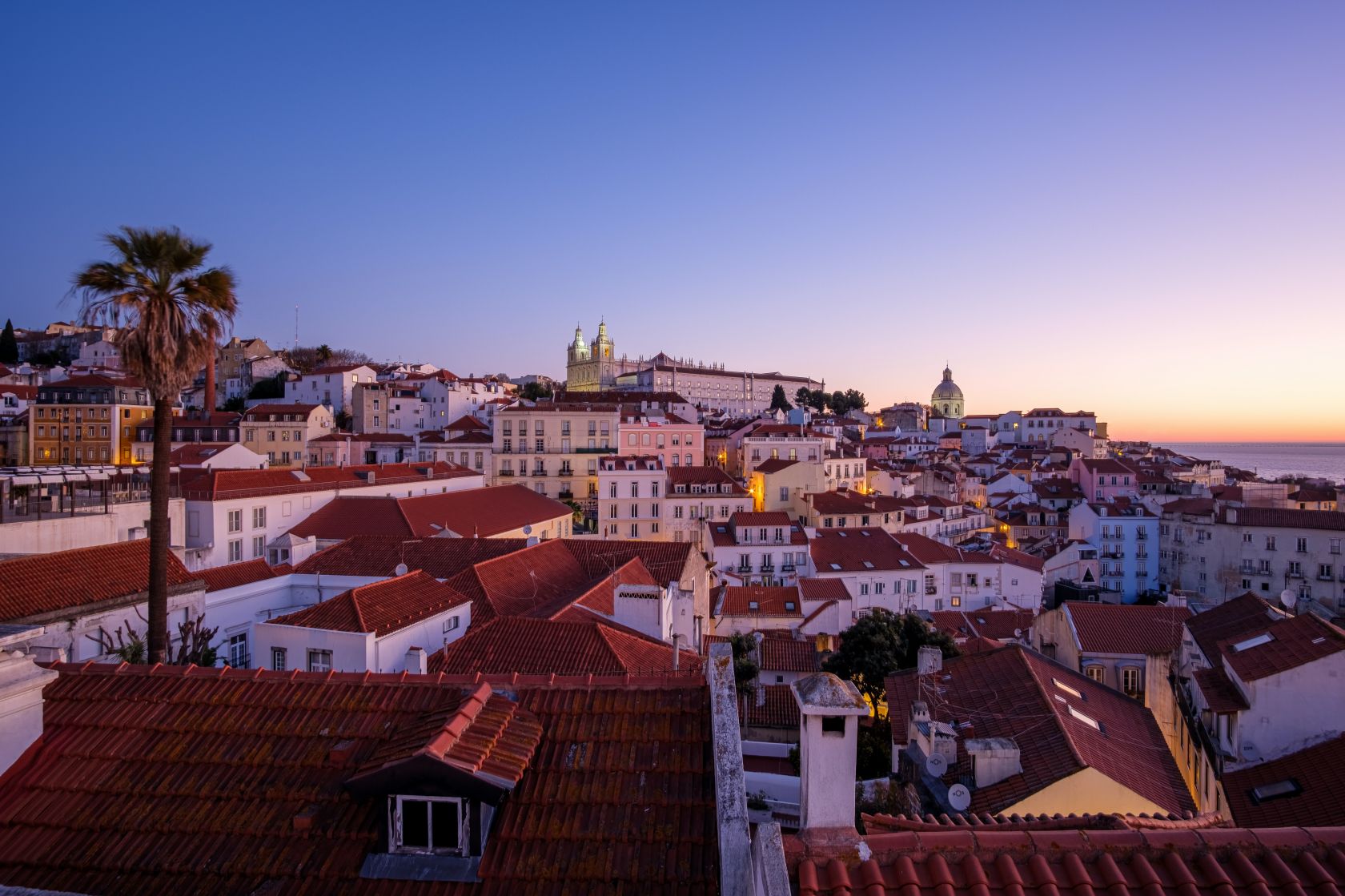 Waking up on a Sunday morning to the melodies of the bells of Santo Estevao is a delightful treat (unless of course the night before ended late and some Port tasting was involved) The place is positively buzzing with new experiences. A teeny tiny Fado house with six tables is a stone’s throw from our window, listening to the strains of the melancholic refrain late into the night is a first for me. I pinch myself that I am immersed in the authenticity of a centuries-old culture that in many ways does not seem to have changed too much. My husband laughs and tells me that when he left Lisbon 30 years ago, nobody ventured into our neighbourhood without keeping a hand on their wallet and expecting to end the night in a fight.

It remains authentic in many ways, he says, but far improved from the dark and dreary place it apparently once was.

Alfama – Crowned by St. Georges castle, this is one of the oldest neighbourhoods in Europe and a labyrinth of tiny houses, lookout points, shops, restaurants, and hidden squares.

Bacalhau – The Portuguese have been enjoying a love affair with salted cod since the 14th century, there are not only hundreds of recipes dedicated to it, but even museums to herald its praises.

Alfacinha – People who live in Lisbon are nicknamed ‘’little lettuces’’. After having read dozens of conflicting opinions as to why there appears to be no real explanation.

Ginjinha- Sweet, alcoholic, and delicious – a local liqueur made of infused cherries in alcohol, (usually aguardente – Portuguese Brandy) and spiced up with cinnamon or cloves. Often sold in a chocolate cup.

Sardines - A Portuguese love affair. A hot charcoal grill and straight-from-the-ocean fresh sardines served on a slice of hearty bread. Best eaten hot, fresh, and in the Summer.

Festas of Santo António – A riot of fun, noise, music, parades, grilled sardines, and dancing in the streets. A party to celebrate the patron Saint of love which lasts for weeks but is officially Mid-June.

Santo Estevão – The steps of the Church became a gathering place for fado musicians, who are still playing their sensual music long into the morning hours.

Port – A fortified wine produced in the North of Portugal. There are several excellent Port tasting rooms in Alfama.

Fado- Distinctive Portuguese music with its roots in Alfama. Fado means fate and speaks of missing, longing, and the daily life of real people. Often accompanied by a Portuguese 12-string guitar.

With dual British and USA citizenship Lisa has lived in England, Spain, USA, and Mexico and is now resident in Lisbon and Algarve. Interior design entrepreneur and co-founder of Tripwix Vacation Rentals, a Lisbon-based luxury rental and property management agency.

What a fresh insight! This article really captures the spirit of a newbie in Alfama. Love how her Portuguese husband begins to relive Lisbon through "expat" eyes. We often miss the beauty of what is right under our noses.
Looking forward to reading the next instalment.

What a marvellous and delightfully amusing article!

APA supports more than 380 animals in its facilities

“Lisbon is a strategic location to do business in”

Take a closer look before deciding on Golden Visas

Living the dream above the clouds

A day in the life of a new Lisbon arrival