HomeLifestyle“Commander João G – Confessions of an Extremist” by Irene Starland

“Commander João G – Confessions of an Extremist” by Irene Starland

I had the pleasure of speaking with Estonian writer, Irene Starland all about her English book “Commander João G – Confessions of an Extremist” which came out earlier this year.

Originally a poet, Irene has written two poetry collections but this is her debut novel which affirms her strong connection with Portugal.

The author splits her time between Estonia and Lisbon, often spending the summer months in Estonia. From our conversation, it was clear to see that Irene has a special connection with Portugal as she proudly told me “It is where my heart belongs”.

Irene first visited Lisbon back in 2002 which inspired the writing of “Commander João G”, she explained that “I didn’t know anything about Portugal then but by chance I met a Portuguese guy in a café in the capital of Estonia and he invited me to Portugal.”

“We fell in love and I lived in Lisbon for a couple of years and then moved back to Estonia but I could not shake Portugal so I would keep coming back for months at a time. About 10 years ago, the story came to me, which is based on the group of friends I met whilst I lived in Lisbon.”

Irene shared that “If you put it simply, it is a story of three Portuguese guys going to Estonia, they want to explore and see Estonia because they have heard that the most beautiful women in the world live in Estonia but if you look beneath the surface, it is a story about differences between nationalities and countries and possible tensions between people.”

“In Estonia we have a big Russian population and I discuss the reasons for the tensions between Estonians and Russians, there is a huge fear in Estonia that we might be next following the war in Ukraine.”

Irene kindly shared a synopsis which reads: “You have to understand that it was not my intention to become “an extremist” in the beginning. Like I told you, I just wanted to find my ideal woman, my Baltic Bride. Why Baltic, you ask. Well, because my colleague Carlos, head of another department in my ministry, said that the most beautiful women in the world live in Estonia.”

“As I understand it, extremism means violence and is the same as terrorism, and when you look at me, what do you see? A simple Portuguese man, middle-aged, with a slightly bulging belly and a slightly balding head, but still reasonably handsome, with a good butt (many women have said so!) and a nice smile. The friends of my sister (whom I have all dated, by the way) even say that I’m very handsome. But I don’t like to boast. Let’s say that I’m medium-handsome. An extremist, a terrorist, head man of the group that was planning coup d’état? That’s what all the papers of Estonia called me before the trial – no doubt with an intent to influence it!”

We also discussed how Portugal and Estonia differ, which is a main topic discussed in the book. Irene affirms that “Portugal and Estonia are very different countries, with the main difference being the cold Estonian weather versus the warm Portuguese climate.” Irene wished to stress that “Portuguese people are very welcoming to foreigners and that she has never felt unwelcome here.” Adding that “Estonian people by comparison are suspicious of foreigners, eventually warming to people but it can take even years to become friends. As a tourist you won’t notice this but if you come to live in Estonia people do want to get to know you before they become your friends but the Portuguese people become your friend instantly, taking you as you are which is what I really love about Portugal.” 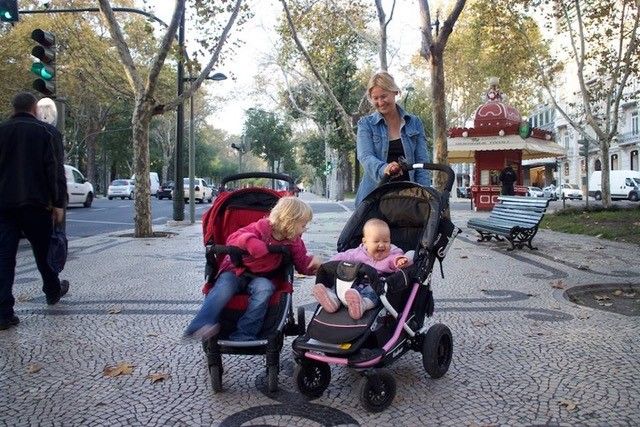 We also spoke about juggling writing and motherhood, which I thought was particularly inspiring. Irene has three daughters, Julia aged 10, Aurora aged 7 and Estrella who is 2. Irene admitted that “Trying to find the time was most difficult and I would often put my kids to bed and start typing”. Adding that “My husband Inno was an enormous help to me while writing the book. Many times, he put the kids to bed and played with them so I could write in peace.”

Irene started writing this book when she was pregnant with Julia and she told me that is has taken her 10 years to complete because her daughter was very sick “Julia has a very rare genetic syndrome, called Angelman Syndrome, often having epilepsy fits so I paused writing the book so it is a total dream come true that my book is out now.” Irene dedicated her book to Julia, “she is the source of my inspiration and strength to write this book because I wanted to bring her to Portugal”. Most positively, Julia is doing much better which Irene believes is down to the Portuguese climate and food.

Most excitingly, Irene will be present at The Lisbon Book Fair, running from the 25th of August until 11th of September so if you would like to meet the author, please do come along for her presentation on the 3rd of September at 5pm. Irene also revealed that she plans to write a sequel which includes the same characters but focuses on the theme of war, and how it influences people.

If you would like to purchase a copy of “Commander João G”, please visit FNAC or see https://www.livrariaatlantico.com/autor/irene-starland or https://www.amazon.com/-/es/Irene-Starland-ebook/dp/B09SH8Q627

PURE - Be Loved By Nature

By Jake Cleaver, In Lifestyle, Community, Health for the new age, Algarve

PURE - Be Loved By Nature

By Jake Cleaver, In Lifestyle, Community, Health for the new age, Algarve

By PA/TPN, In Lifestyle, Community, Curiosity

Bringing back songs from the past

By Bruno G. Santos, In Lifestyle

By PA/TPN, In Lifestyle, Home & Garden

7 tips to help you drink enough water during a heatwave

Could getting your kit off boost your wellbeing?

By PA/TPN, In Lifestyle, Health, Health for the new age

The House of Portuguese - a fundamental metaphor

Do you have Indigo Children at home?

By Paula Martins, In Lifestyle, Community

“Commander João G – Confessions of an Extremist” by Irene Starland