Maureen Thorpe is a historical fiction author living in Luz in the Algarve.

Maureen describes her stories as being about “history, mystery and magic” in which she weaves her stories around “the intensive and absorbing research required.”

Most interestingly, Maureen has been a nurse on two continents, a running coach, a yoga teacher, a world traveller and a Padi certified scuba diver prior to becoming an author, despite writing all her life.

For the last couple of years, Maureen has spent her winters in the Algarve, affirming she “loves to write here with the sound of the waves providing background music”. Maureen spends her summers in Canada and when asked how they compare she told me “We live in the mountain area, in British Columbia so it is completely different from here. We are at least a ten-hour drive away from the sea so when we are here just to wake up and look at the sea is absolutely fascinating. We did drive up into the mountains a few days ago and it reminded me of being back in Canada except we don’t have cork trees and orange groves.” 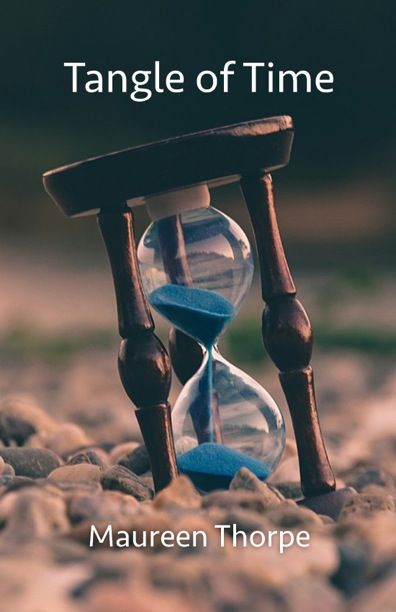 Maureen has published the Annie and Rosamund series; “Tangle of Time”, which came to the author in a dream, “Sailing to Byzantium” and “Coventina’s Well”. Maureen was born and raised in Yorkshire so that is where “I set my novels as Yorkshire remains close to my heart; however, in the second novel, “Sailing to Byzantium” Annie leaves York (Viking Yorvic) and travels across the Baltic to Byzantium (Constantinople). ““Tangle of Time”, finds Annie Thortnton, midwife and fledgling witch, in a medieval village in 1514 where she befriends two young soldiers Will and Jack returning from the Battle of Agincourt in France.” “Annie discovers that a long-ago aunt, also a midwife and witch, has contrived the meeting to expose corruption in a troubled community. Intrigued by the mysterious disappearance of a local innkeeper, the three newcomers find that darkness lurks in the village shrouded by fear and long-held secrets.”

Maureen went on to tell me that “the inspiration for the first novel came to me at a writing group and I wanted to write about strong women as I have read enough of women victims. I love history and wanted to explore different periods in time looking at the lives of ‘ordinary folk’ as opposed to kings and queens, through the means of time travel.”

In addition to the series, Maureen has written a novella called “Murder at the Market” which will be out this spring and is set in British Columbia, Canada where a dastardly murder takes place. Additionally, Maureen is currently writing the fourth book in the series, "All The World's A Stage", where “This time Annie and her companions travel to London in 1600 where they find more trouble and meet up with William Shakespeare.”

For more information about Maureen Thorpe and to purchase her books either in paperback, e-book or Kindle format please see https://maureenthorpe.com/ . Asides from her books, Maureen sends out a monthly newsletter called "Tales from The Cabin" which you can subscribe to on her website, with the last few having featured Portugal.

Homes in the future

By PA/TPN, In Lifestyle, Environment, Renature

Finding your true self

By Paula Martins, In Lifestyle, Health

A glimpse into lives of parent puffins

Portuguese children do not live in healthy homes

By Advertiser, In Crypto

Turn your old toothbrush into a surfboard

By Jake Cleaver, In Lifestyle, Sustainability

My first car was a V8 Range Rover

By Douglas Hughes, In Lifestyle

How to support someone with a health problem, Part two - Active Listening

By Paul Jokinen-Carter, In Lifestyle, Health

Beyond self-sabotage is your true self

Taking the fear out of puddings

By PA/TPN, In Lifestyle, Recipes