Before the days of plastic bags, when people used to go to market, they would solve the problem of how to carry all their shopping home with them by looking to nature - and they passed down the knowledge through the generations about how to weave the most charming and intricate baskets out of the trees and plants they found in the countryside around them. 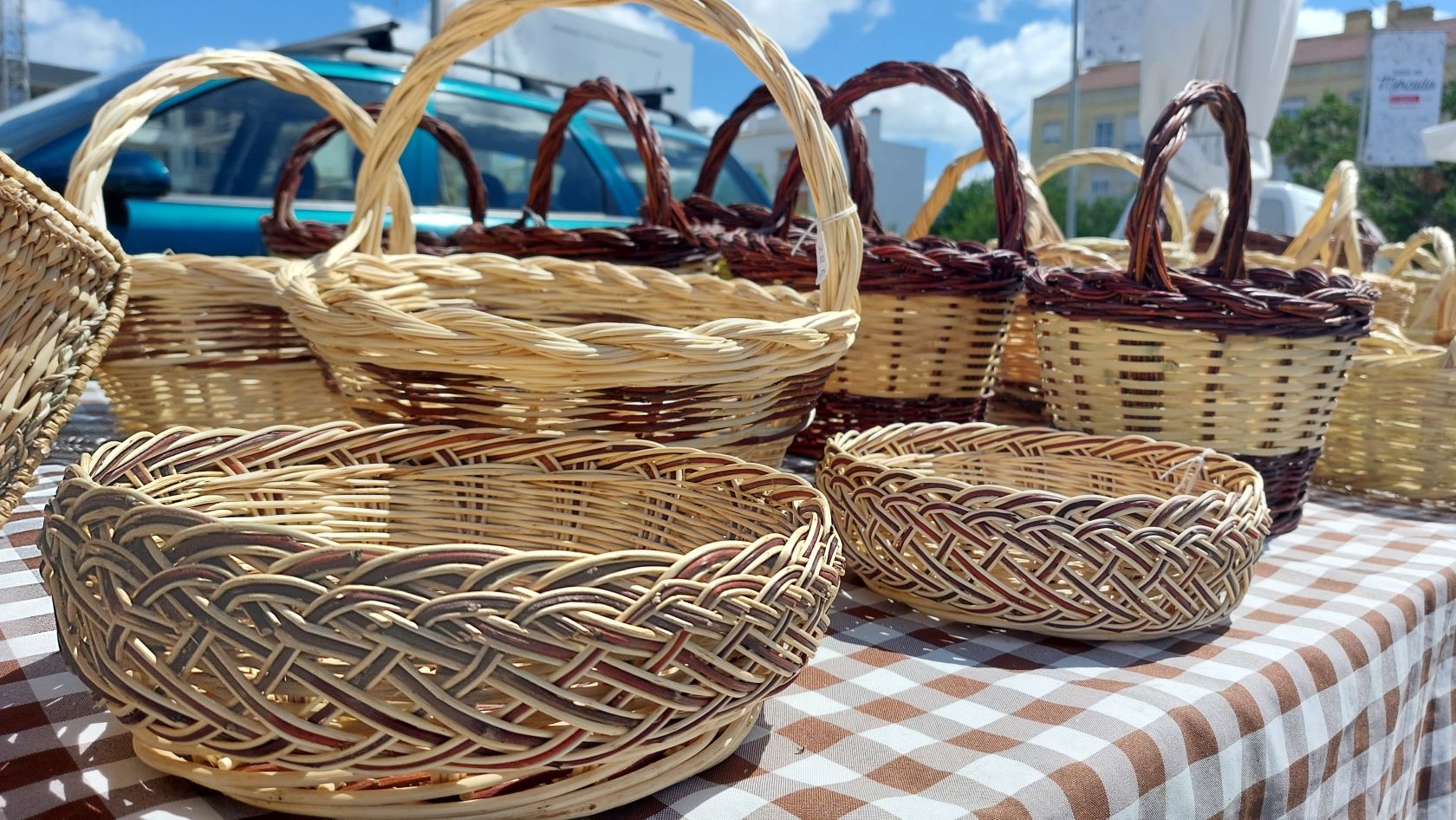 These baskets were used to transport all kinds of things. The ones with lids, for example (I later found out), were used to take your picnic to work with you and were hung in a shady tree until lunchtime.

Nowadays though, this beautiful, reusable and totally natural way of carrying things around is sadly becoming something of a dying art.

A case for baskets

This is why, when I was back at the local fruit and vegetable market in Almancil (that, you may remember, I told you about in my story ‘The Marketeers' a few months ago) I was really happy to spot a traditional basket weaver in action.

Senhor Amendoeira (whose name translates, rather wonderfully, to ‘Mr Almond Tree’) was sitting down busily making a basket and was mid-weave when I approached him excitedly and sat down cross legged on the floor, a bit like a curious schoolboy, and gazed inquisitively up at him to observe and ask him all sorts of questions. 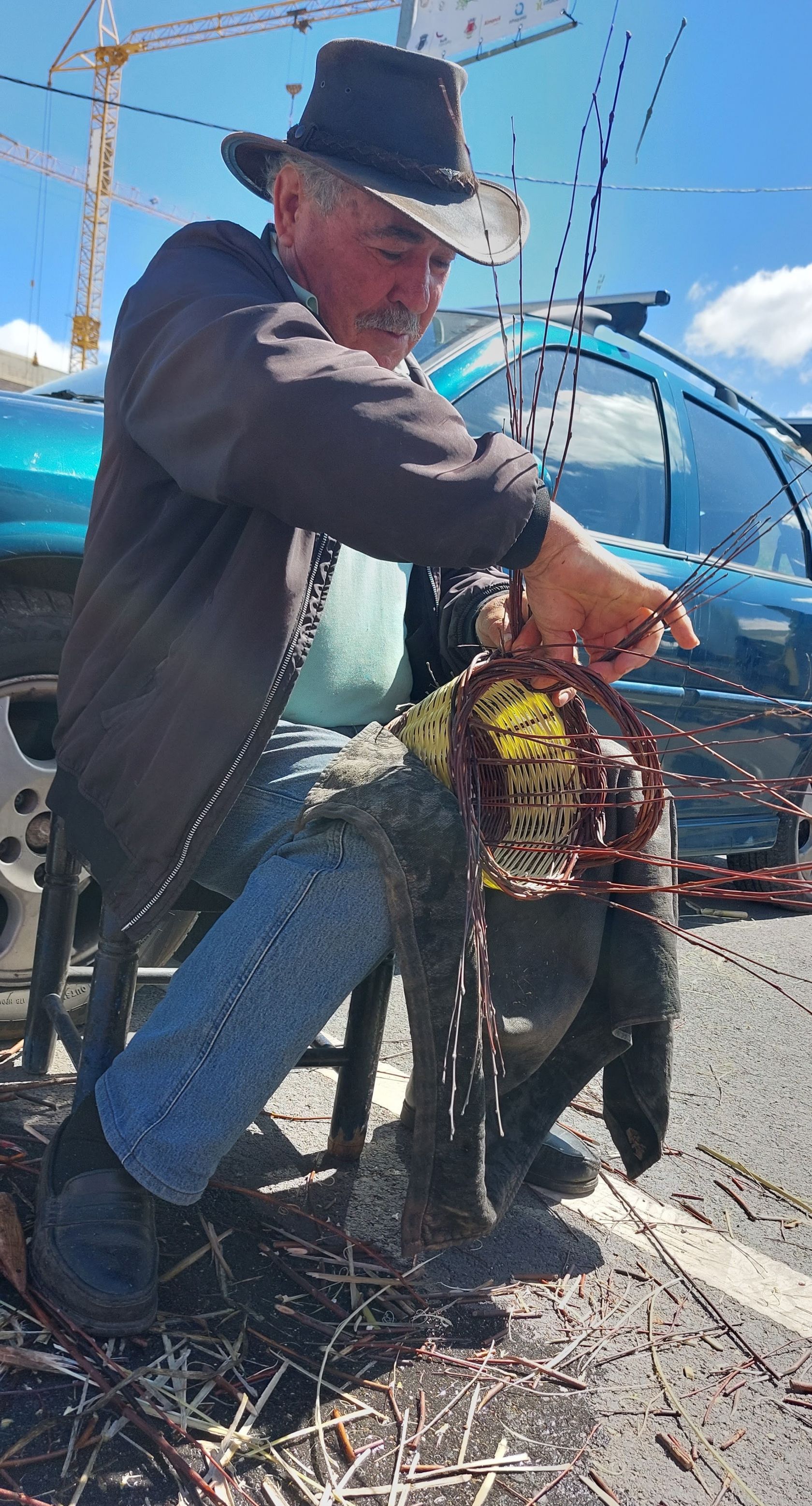 He was quite happy to talk to me and impressively didn’t have any trouble at all keeping up a conversation and continuing with his rather fiddly work. After all, he explained, he has been doing it for 50 years and his hands know what they are doing. He told me his father had taught him when he was just 8 years old.

Fascinated by the process, I pushed him for specifics on how exactly he does it. Turns out you can make a basket out of three different types of natural material. You can also, as Sr. Amendoeira was doing, mix and match two of them so that the dark and light colours intermingle for a more interesting effect.

The first natural resource to use is known as ‘Cana’ or Giant reed in English. This is something you can find growing in wild thickets all over the Algarve. The secret is knowing what bits to use for basket weaving and Sr. Amendoeira explained to me that you want it to still be a bit green so that it's bendy enough (after you’ve cut it up into thin strips) to ‘get your weave on’ without it snapping.

The other natural material he uses is from a tree called a ‘Vimeiro’ (a type of willow tree). To find these long bendy branches that hang down from this tree, Sr. Amendoeira told me that every January he goes up to a lake in the Alentejo somewhere to collect them and spends the month harvesting enough to last the year (while they regrow). He dries them out and ties them together in big bunches. However, before he gets weaving, he soaks them in water for about two hours so that they are pliable again. Indeed, in the heat of the market, he had a bottle of water at hand and kept giving them an extra splash as he worked.

Senhora Amendoeira, who was busy selling the baskets also makes some but she uses a different material. She makes her rather softer baskets out of what they call ‘Palmas’. Everybody thought it was very amusing when, in my naivete, I assumed that must mean palm trees. “But they aren’t native to Portugal, are they? And how do you climb up to get them?”, I asked.

Turns out they were actually talking about dwarf palms also known as the ‘palmeira-anã’. These little palm bushes are native to Portugal, don’t require any kind of aerial acrobatics to harvest and can simply be found growing wild and free in the countryside. 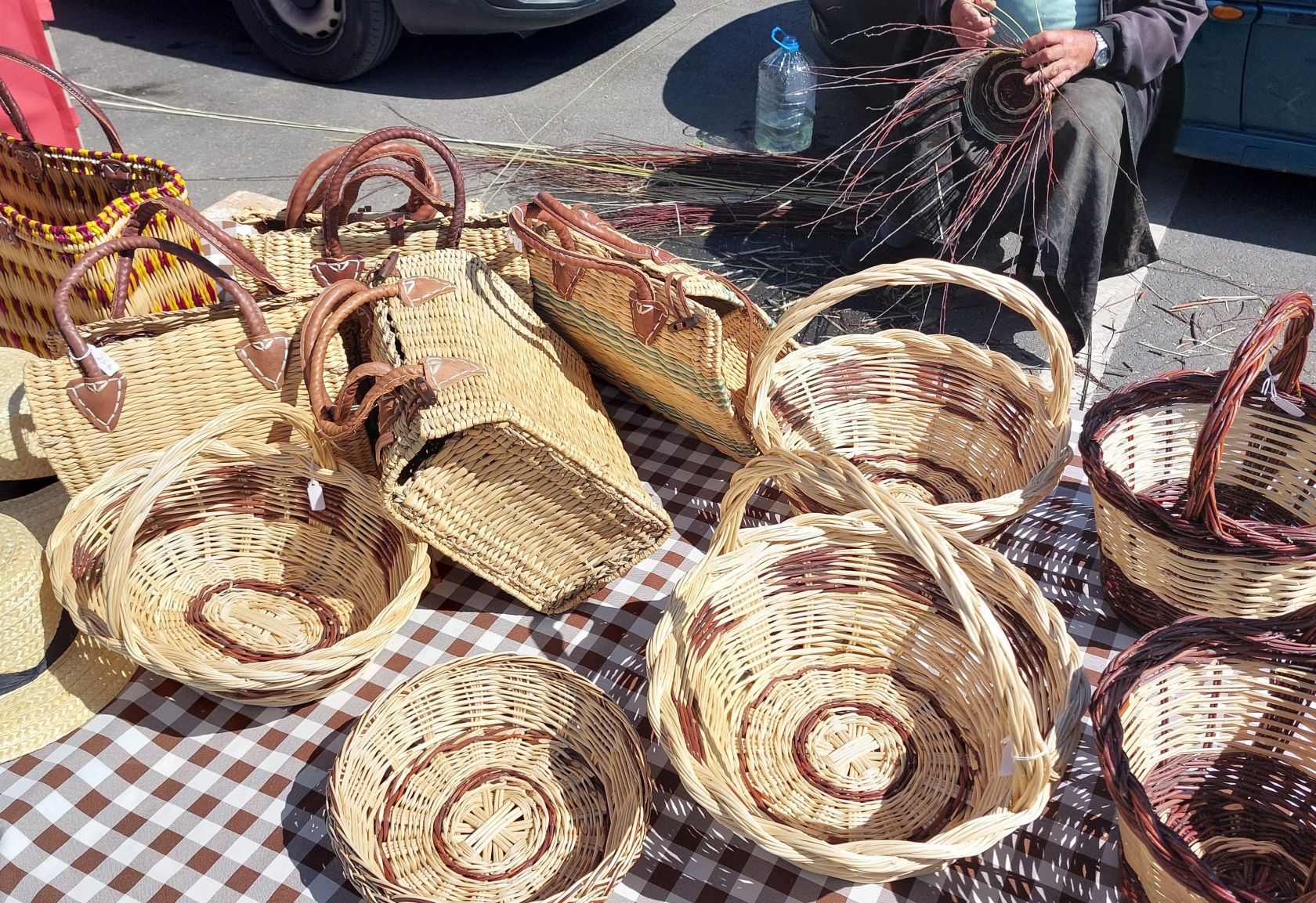 Tools of the trade

I was also very impressed by how few tools Sr. Amendoeira needed for the job. He had a pair of clippers, a knife and a pointy bit of wood. This bit of wood he showed me is used to hold his basket weave in place as he works. He’s only just started to use it though and it turned out that for the last 50 years, he's used a sheep's horn instead. However, they have recently got a puppy who, just last month, when his back was turned, made off with this old horn and chewed it to bits. 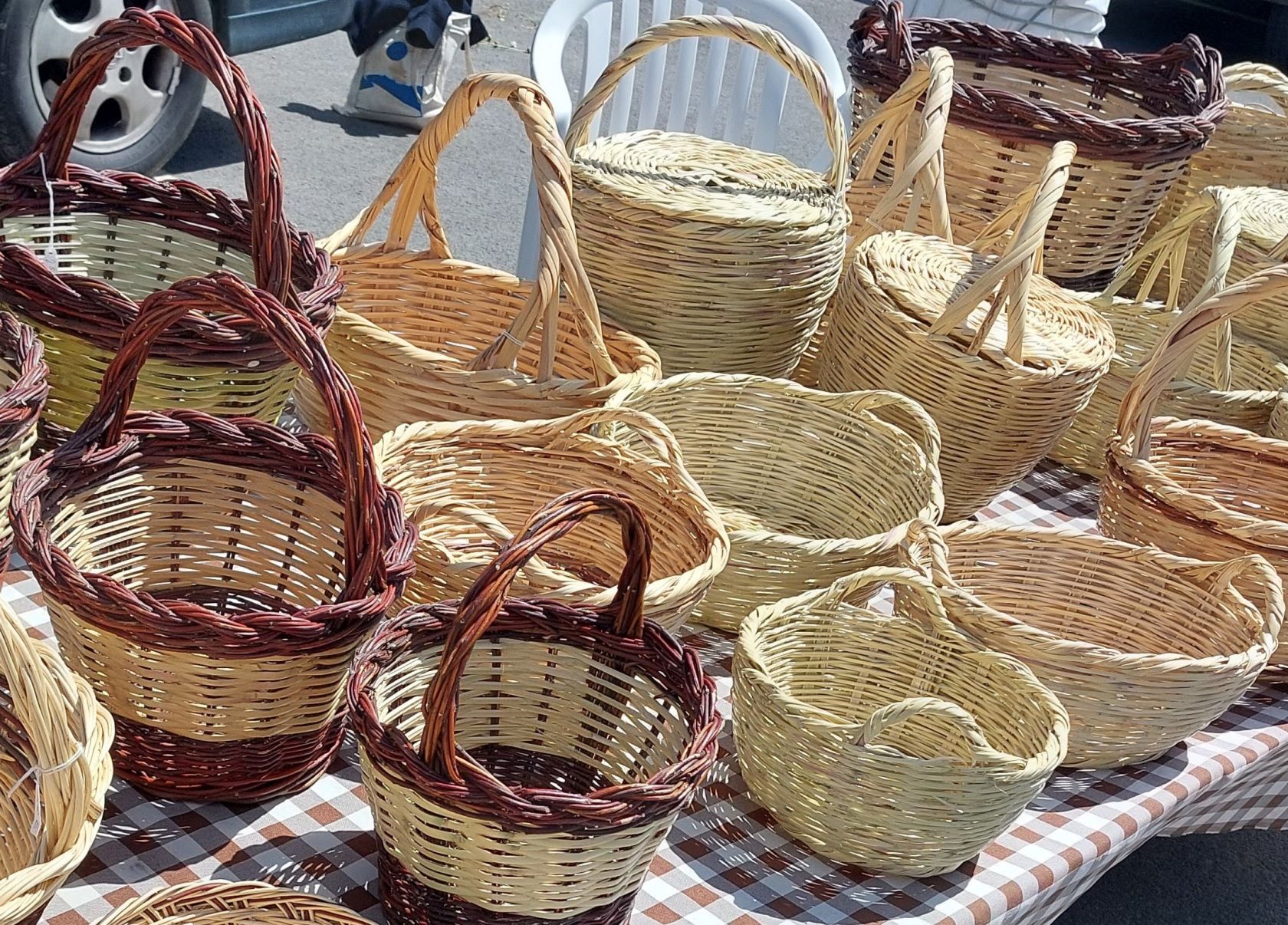 But what to fill it with?

Once again, I highly recommend you go and check out this market in Almancil. It's on every Thursday morning (between 7:30 am and 1:00 pm) next to the Associação Social e Cultural de Almancil (ASCA) and it's exclusively for local farmers which ensures all the fruits and vegetables are the very freshest on the market.

This means, of course, that if I have somehow persuaded you to ditch the plastic and go ‘old school’ and you do buy a basket from Sr. and Sr.ª Amendoeira - you will be spoilt for choice of what to fill it with.