Portugal has been ranked as the best European country for living and working abroad in the Expat Insider 2022 survey.

In the survey, Portugal comes out in fourth position out of 52 destinations assessed. The country makes it into the top 10 of the Quality of Life (4th), Ease of Settling In (7th), and Personal Finance (10th) Indices. While it also ranks in a good 19th place in the Expat Essentials Index, it does not perform so well in the Working Abroad Index (35th). However, overall, 85 percent of expats are happy with their life in Portugal, compared to 71 percent globally according to the survey of almost 12,000 respondents from across the world.

A better quality of life

Beyond that, 93 percent of expats find it easy and safe to get around on foot and/or by bicycle (vs. 77 percent globally), and 82 percent feel that they can openly express themselves and their opinions (vs. 64 percent globally). For the latter factor, Portugal actually ranks first worldwide. When asked what they like most about life in Portugal, an expat from India states: “the good environment and peaceful life”.

A place to call home 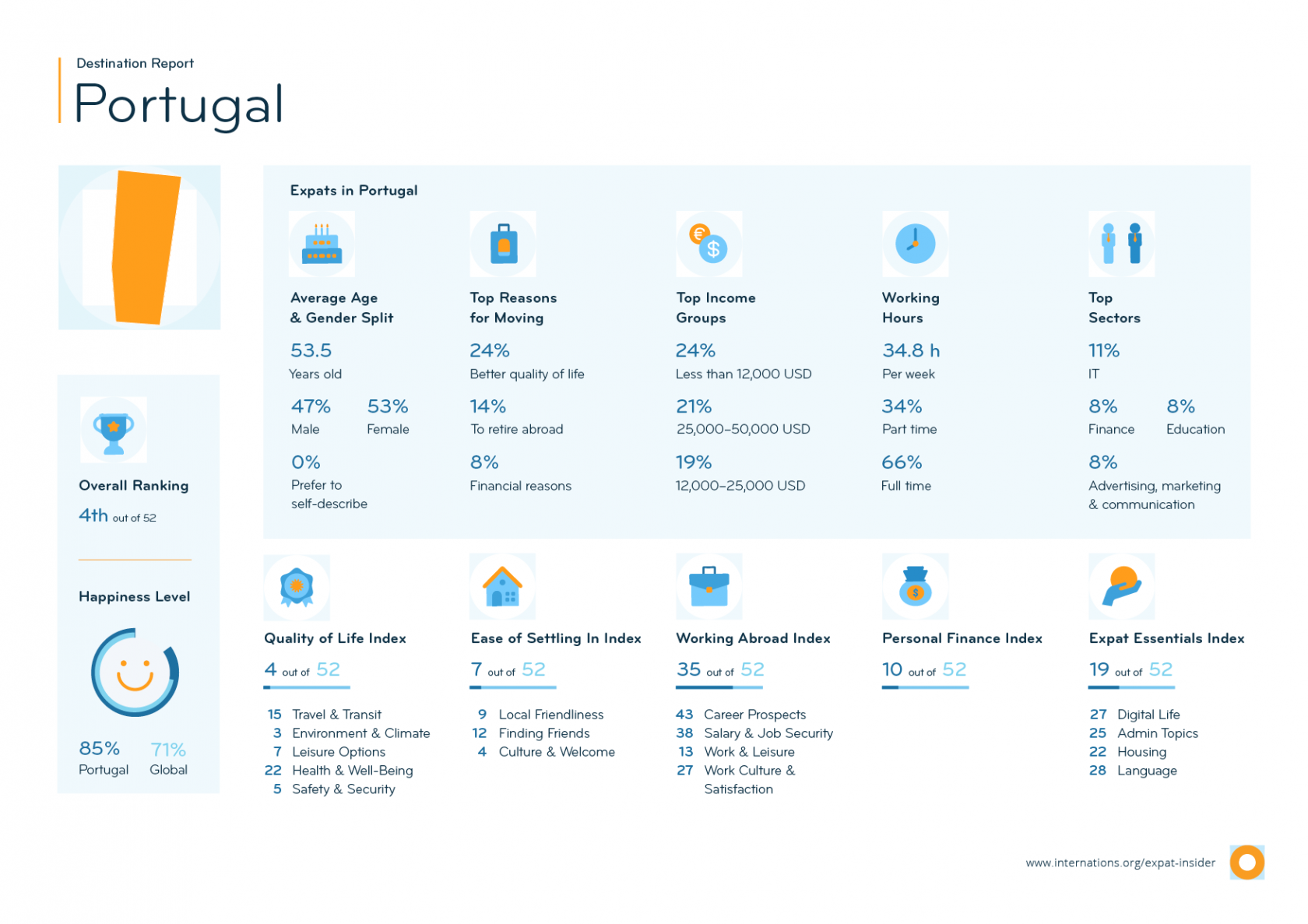 The low cost of living (8th) is another highlight of expat life in Portugal. More than seven in ten (71 percent) rate the general cost of living positively (vs. 45 percent globally). However, just 63 percent are satisfied with their financial situation (vs. 60 percent globally), and 74 percent feel that their disposable household income is enough or more than enough to lead a comfortable life (vs. 72 percent globally) — both shares are just slightly above the global average.

Portugal ranks 19th in the Expat Essentials Index. While the survey shows an average-to-good performance for most factors surveyed in this index, this is not the case for administrative topics. More than half the expats (52 percent) find it hard to deal with local bureaucracy/authorities (vs. 39 percent globally), and 24 percent are unhappy with the availability of administrative/government services online (vs. 21 percent globally). “Dealing with the government bureaucracy is a significant challenge and a paperwork nightmare at times,” says an expat from the US.

The best and the worst

According to the Expat Insider 2022 survey results, Mexico (1st), Indonesia, Taiwan, Portugal, Spain, the UAE, Vietnam, Thailand, Australia, and Singapore (10th) are the best destinations for expats. The top five destinations stand out with regard to the Ease of Settling In and Personal Finance.

State of alert approved due to fires

By TPN/Lusa, In News, Portugal, Politics

Another fire starts in Central Portugal

By TPN/Lusa, In News, Portugal, Central

I am not an expate but I have been to Portugal over 20 times and I found the Portuguese to be the nicest people and Portugal to be a charming country mainly because of the nice character of the people who live in this country.

Portugal needs to be first choice for the young and qualified, its economy may reflect accordingly. These news are offensive for the Portuguese since expats have tax incentives and exemptions!

After moving to Portugal from Canada 8 months ago our daily lives have been nothing but bureaucracy/ paperwork and documentation so be prepared! That being said, we look forward to the day this will all be behind us and we can enjoy life in this beautiful country that has so much to offer.

To Nola Taylor from Algarve on
I lived in UK from 1999 until 2018 and I'm Portuguese and my husband British and I understand very well the felling that I did forget complete about the bureaucracy and endless paper work that needs to done in Portugal the same the happen to my family in the beginning .

I have lived here in Portugal for 6 years and from UK . I can honestly say this is our home the standard of life \people and how safe it is to live here.

I can honestly say I want be going back to the UK whwn I can have a far better quality of life here in Portugal.

State of alert approved due to fires

By TPN/Lusa, In News, Portugal, Politics

Another fire starts in Central Portugal

By TPN/Lusa, In News, Portugal, Central

Right sizing your cash holdings for your life abroad

By TPN/Lusa, In Tourism, Alentejo

By TPN/Lusa, In News, Portugal, Environment

Municipalities in the Serra da Estrela demand a state of calamity

By TPN/Lusa, In News, Central

Monkeypox cases have risen by 20 percent

By TPN/Lusa, In News, World, Portugal

By TPN/Lusa, In News, Central

By TPN/Lusa, In News, Environment, Sustainability

Another heat wave for Portugal

By TPN/Lusa, In News, Environment, Portugal