Few people would happily reside next door to lions. But in Zambia’s Liuwa Plain National Park, where communities still live inside the protected wildlife area, Africa’s biggest cats are welcome to come and go as they please.

The unusual tolerance is down to the legendary Lady Liuwa, a resilient female who survived years of devastating poaching and trophy hunting to become the only lion in the park.

Alone, she would seek company by sleeping close to human settlements. Her regular visits to the burial site of Mambeti, daughter to the Lozi king’s spiritual advisor, even led elders to believe the lion was a reincarnation of the young woman rising from her grave.

Although Lady Liuwa died of natural causes in 2017, without ever producing any offspring (‘She was a human, so how could she?’ communities insist), her legacy continues.

Bon Jovi, a handsome six-year-old male with a rockstar mane, is the product of a successful reintroduction programme launched by NGO African Parks in 2009. Watching him stride confidently through golden blades of thatch grass, his strawberry blond locks shimmering in the late afternoon sun, I’m in no doubt he dominates this vast land.

Off the beaten track

Part of Zambia’s little explored Western Province, on the border with Angola, Liuwa Plain sprawls for 3,660-square-kilometres across endless pans and grasslands flooded for part of the year. Every day, the sun rises above uninterrupted horizons. When it sets, it’s easy to believe you’re standing at the edge of the world.

Magical and mysterious, it’s a region steeped in folklore and tradition, where stories and legends help communities make sense of daily life.

In the early 19th century, the King of Barotseland, Lubosi Lewanika, decreed his people would be custodians of the park and its wildlife. Settled in specific areas to avoid any competition with animals for resources, 10,000 Lozi people still live in the park. Each family is designated a pan for fishing – further proof Liuwa is a model for sustainable living in the bush. 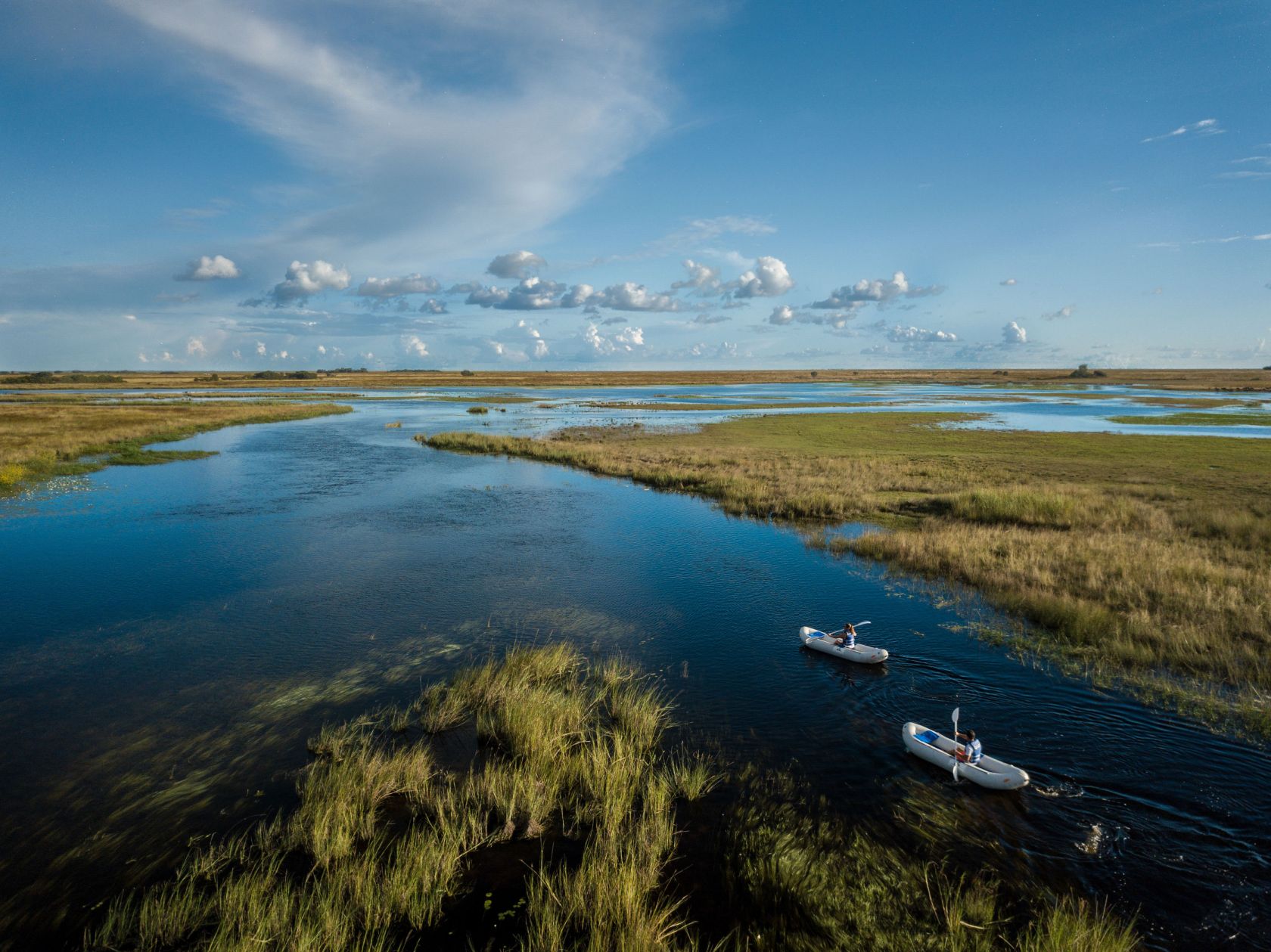 When I visit in early June, the current King has already shifted his palace to higher land, as the Zambezi River floods into the Barotse floodplains now the rainy season has come to an end.

The Kuomboka, a grand ceremony held every April, when Lozi people paddle their sovereign to his seasonal home, is referenced in the communal area of Time+Tide’s King Lewanika camp – the only five-star accommodation in the park, open from October to July.

A replica of the King’s black and white vessel hangs from the ceiling of a thatched communal area, set in a small woodland of Mbula plums.

Local touches continue with lampshades fashioned from women’s fishing baskets, while a silimba – a traditional Lozi xylophone-style instrument with gourds dangling from wooden slats – provides musical entertainment during my evenings in camp.

Big distances coupled with sandy terrain make it impossible to do anything here in a hurry. Not that I’m in any rush.

With few distinguishing features, it’s easy to become disorientated. The only landmark is an isolated cluster of palms marking the centre of the park, where – according to Lozi culture – the king planted his walking stick on the same spot.

Around me, plains are covered in a carpet of pink and yellow flowers, while beds of wild mint give off a sweet and cleansing scent. Sunken below the surface, dwarf forests reveal only their canopy, and snouted termite mounds resemble stubby stacks of black volcanic rock.

In a shallow lagoon, I watch great white pelicans fish in unison, plunging headfirst and ruffling their tailfeathers skyward, like a troupe of rara-skirted dancers at the Folies Bergère.

Without any shade, wildebeest dig hollows in the sand to keep cool. In October, 36,000 will arrive to calve as part of Africa’s second biggest migration. But for now, most of them are in the north of the park.

Since 2003, African Parks has been managing Liuwa in partnership with the Zambia Department of National Parks and Wildlife and the Barotse Royal Establishment. Along with lions, they’ve helped reintroduce buffalos, elands and – most recently – wild dogs to the park.

The two species gaining most attention, however, are cheetahs and spotted hyenas – both filmed by the BBC for the David Attenborough’s Dynasties II. 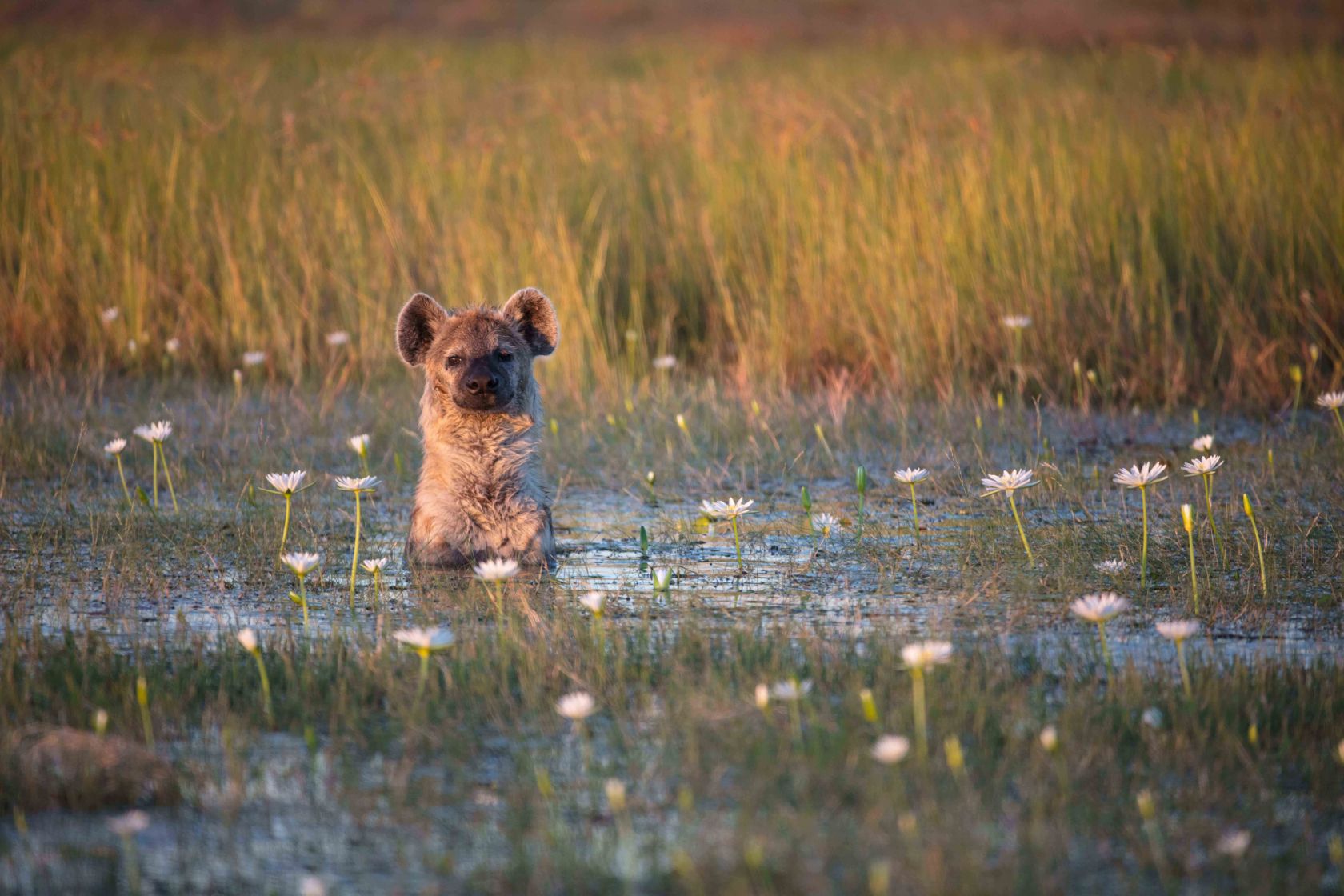 During one late afternoon drive, we run into star of the show Kali – estimated to be the longest living cheetah in Zambia.

“This is the first time we’ve seen her in two months,” gasps my guide, Rabbie, almost in disbelief. We leave her hunting for oribi (a type of antelope). But the next morning, like a ghost, she’s gone.

In this unpredictable landscape of heavy floods and fierce sunshine, animals have developed unusual adaptations and survival techniques: in the dry season, catfish go into aestivation, waiting in the mud until rains return; while, in the absence of many predators to scavenge from, hyenas have learned to hunt on their own.

“I’ve seen them take a carcass and bury it in the pans to avoid it being eaten by vultures,” Rabbie tells me, as we wait at a den the following morning. When the adults arrive home, their mouth ruby red with blood from a fresh kill, several pups emerge from holes, popping nervously up and down like a Jack In The Box. 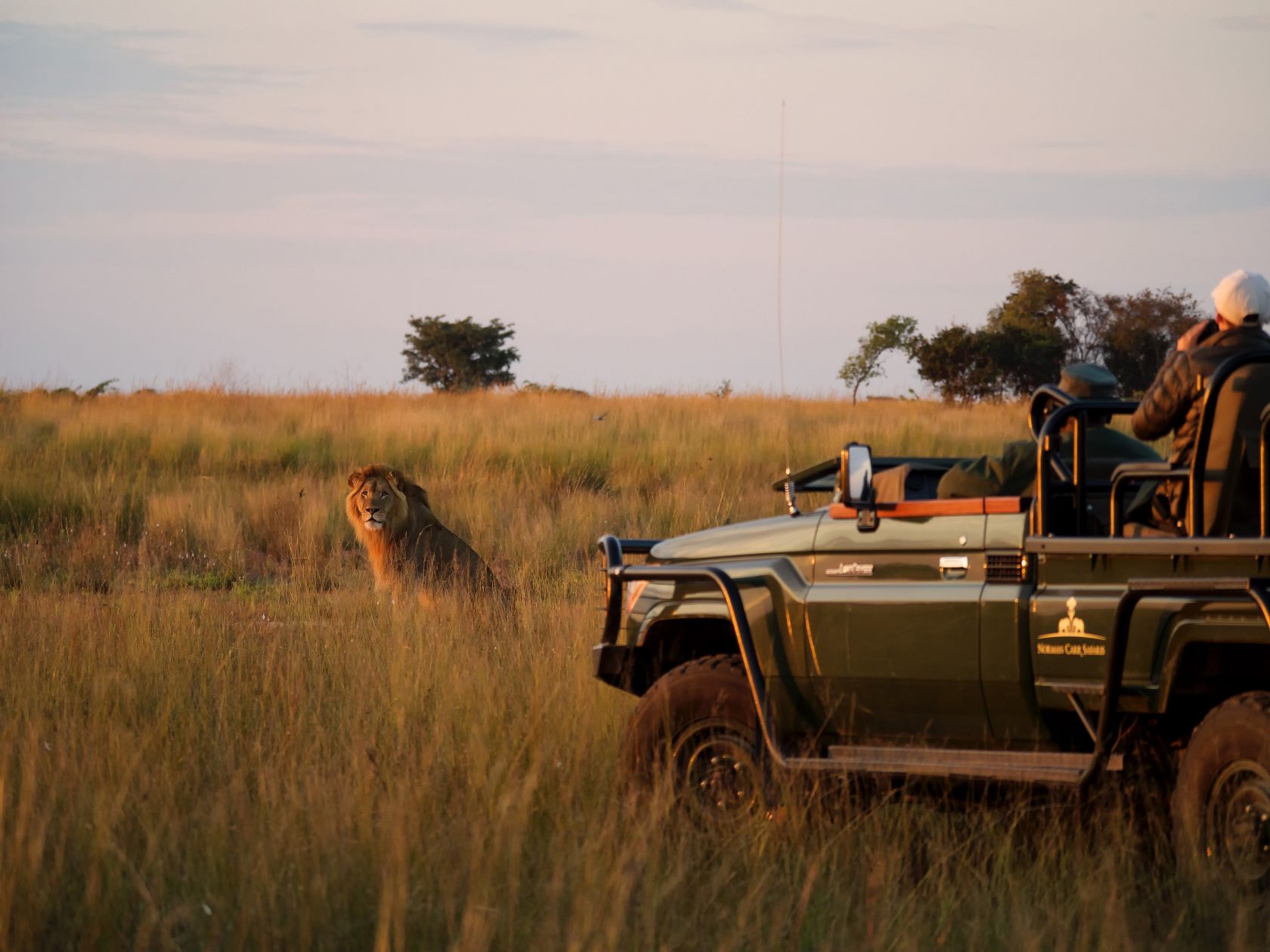 Driving back to camp, I notice several fishermen laden with nets – a reminder it’s not just animals who need to find food in the park.

Taking a detour, Rabbie brings me to a local village where African Parks are helping the community to develop a smoked catfish trade with Lusaka and the DRC.

Waving down our Land Cruiser, a headmistress eagerly invites me into a newly built school, financially supported by the Time+Tide Foundation, a philanthropic arm of the company. Ushering me into a classroom, she shows me the single table where children stand for lessons and take notes; poking my head into her simple office strewn with paperwork, I’m amused to spot an immaculate pair of high heels tucked beneath the desk.

Although their resources are often limited, I’ve come to realise the Lozi people are enviably content with their world. Remarkably, they’ve found a way to co-exist with even the most feared predators in the toughest conditions.

The result is a rare state of harmony.

And that’s why, in these infinite, parched plains below ever-shifting skies, I can easily understand why Lady Liuwa felt so at home.

Events at the Museum

"New bridges of dialogue" between Ukraine and Turkey

Flights between Portugal and China return