US fighter pilot Dr. Milton Torres could finally talk about his engagement to shoot 24 rockets at a large unknown contact in the clouds off the East Coast of England in 1957.

US Pilot ordered to SHOOT DOWN UFO - MAN IN BLUE

A typical night in Kent meant completely cloudy skies. The "soup," as the ex-pilot referred to the thick cloudy weather, went from the surface to above 32,000', the highest altitude he reached that night.

Milton was a 25-year-old Lieutenant in the US Air Force, but his squadron was stationed in England. Milton was "sitting alert" in the new F-86D interceptor. His Wing, the 406th Fighter Interceptor Wing, had committed to having F-86Ds stand alert, ready to launch and shoot down the Soviet bomber threat on 5-minute notice.

While the original F-86 Sabre was a day fighter, the Air Force designed the F-86D as an all-weather interceptor, which meant it was designed around a radar to deliver a weapon. To modernize the aircraft into the jet age, the Air Force removed the six 50-caliber machine guns and, in their place, added a fighter radar to the nose that could lock on to targets even in the clouds and shoot the new meter-long "Mighty Mouse" unguided rocket. Air combat under instrument conditions, such as in the clouds and at night, is complicated and very dangerous.

Defending the West from the Soviet threat was a critical air defense mission, and most likely, Milton trained repeatedly in this singular task.

"Two F-86Ds were on 5-minute alert at the end of the runway at RAF Station Manston awaiting the signal to scramble...I can remember the call to scramble quite clearly; however, I cannot remember specifics such as actual vector to turn after take-off," Milton wrote.

I have launched on alert myself in an F-16 and can relate to how fast and chaotic the event can be, especially at night, in the weather.

"To put it quite candidly, I felt like a one-legged man in an ass-kicking contest."

"We were airborne well within the 5 minutes allotted to us and basically scrambled to about flight level 310," Milton wrote.

Milton launched with his wingman from RAF Manston, located on the southeast corner of Wales, and flew East over the Ocean. It was late at night, and Milton climbed to 31,000 feet above the Ocean entirely in the clouds. He could never rise above the "soup," a standard reference to consistent and thick precipitation, like a milky soup.

"The initial briefing indicated that the ground was observing for a considerable time a blip that was orbiting the East Anglia area,"

Milton continued. "There was very little movement, and from my conversation with the [ground control intercept controller] all the normal procedures of checking with all the controlling agencies revealed this was an unidentified flying object with very unusual flight patterns. In the initial briefing, it was suggested to us that the bogey actually was motionless for long intervals."

The ability to stay motionless in the air is fascinating.

"The exact turns and manoeuvers they gave me were all predicated to reach some theoretical point for a lead collision course type rocket release," Milton continued. "I can remember reaching the level off [32,000 feet] and requesting to come out of afterburner only to be told to stay in afterburner. It wasn't very much later that I noticed my indicated Mach number was almost 0.92. That is about as fast as the F-86D could go straight and level. Then the order came to fire a full salvo of rockets at the UFO. To be quite candid, I almost [blank] my pants."

Milton wanted to confirm the order was not false and "authenticated" the controller by asking for specific codes from a sheet. The controller returned with the correct authentication, so Milton selected his salvo of all 24 rockets and prepared for the final turn. 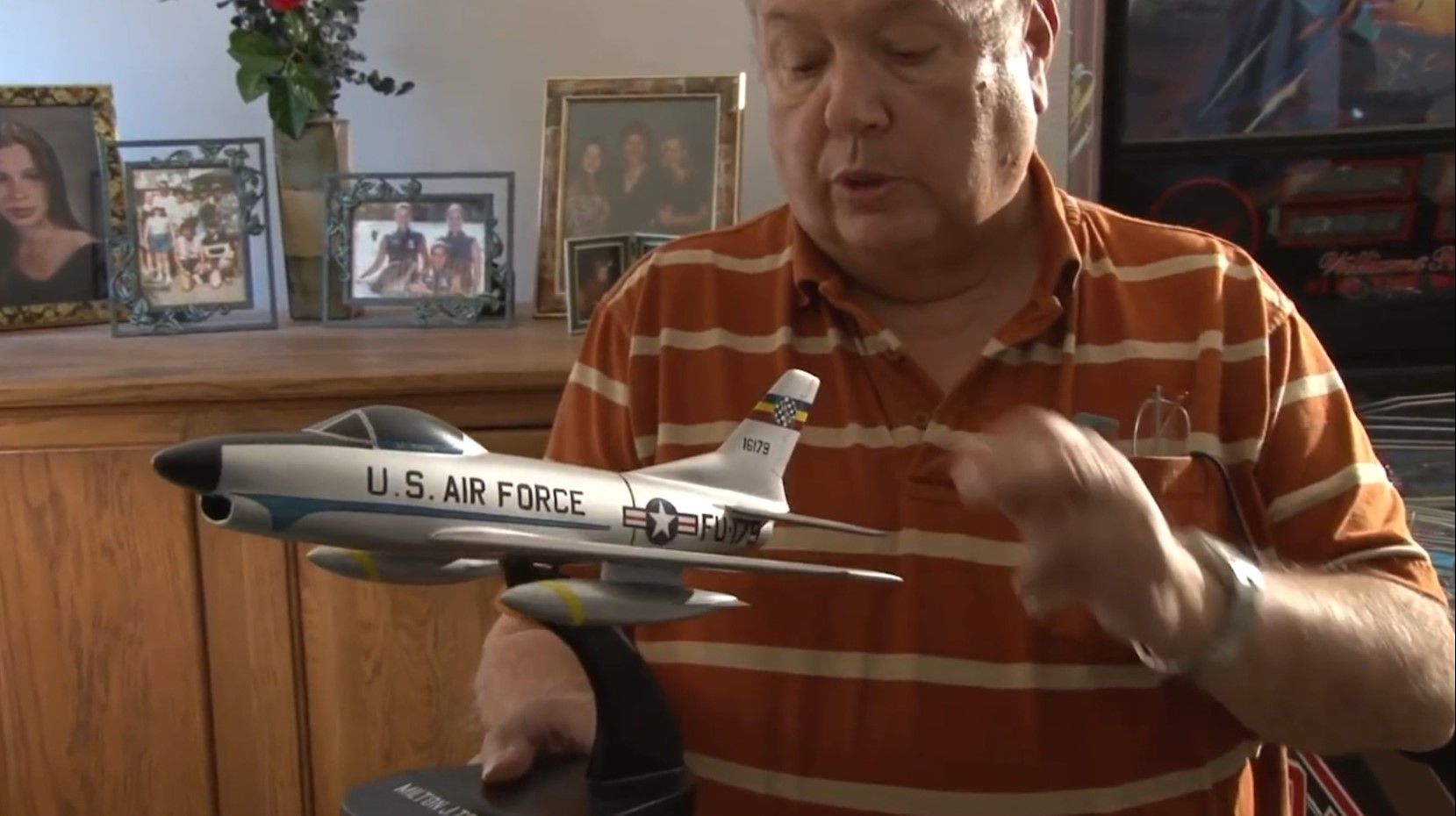 He lined up on the UFO in an attack run. "The blip was burning a hole in the radar with its incredible intensity," he wrote. "It was similar to a blip I had received from B-52s and seemed to be a magnet of light."

Milton quickly locked the target and held the release button. Once his aircraft was in range and the solution filled, the rockets would automatically fire.

"Standing by," the controller said.

Within seconds the blip was visible back on the scope, moving away from the fighter.

"Do you have a Tally Ho?" the controllers asked if he could see the object.

"I'm in the soup, and it's impossible to see anything," Milton replied.

By this time, the UFO was leaving the 30-mile range marker of his radar scope. Milton reported the object was gone, only to be told that the thing was now off the ground controller's scope as well.

Ten seconds from weapons release, the target had zipped away at unimaginable speed.

"My impression was that whatever the aircraft (or spacecraft) was, it must have been traveling in 2-digit Mach numbers [>7,000 mph] to have done what I had witnessed."

With no target in sight, Milton headed home and landed without incident. On the way home, the controller said someone from London would debrief Milton.

"I had not the foggiest idea what had actually occurred, nor would anyone explain anything to me," Milton said.

The next day a sergeant in the squadron took Milton to a hallway, and a civilian appeared from nowhere.

"The civilian looked like a well dress IBM salesman, with a dark blue trenchcoat. He immediately jumped into asking questions about the previous day's mission. After my debriefing of the events, he advised me that this would be considered highly classified and that I should not discuss with anybody, not even my commander. I have not spoken of this to anyone until the recent years."

What do you guys think? Let us know at The Portugal News! Check out a video of this story on my YouTube Channel, "Lehto Files"

SETI found no Aliens? Is there a better way?

2022 will be a banner year for Unidentified Aerial Phenomena

By TPN/Lusa, In News, Portugal, Environment

Significant Opportunities in the Environmental Social and Governance Investment Space

Monkeypox infections in Portugal rise to 810

By TPN/Lusa, In Health, Portugal, News

Do you know your Mongoose from your Meerkat?